Tampakan mine, Philippines – How to lose money and terrify people 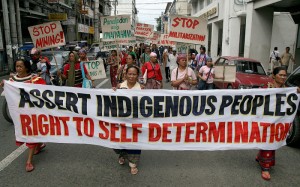 This blog post by Andy Whitmore originally appeared on the PIPLinks website.
On 30th January, the relatively minor Australian ‘miner’ Indophil released their quarterly report for the three months ending 31 December 2013. Such standard reporting fare hardly registers very high on the ‘news Richter scale’. Yet, part of the release managed to spark reports, first in the Philippine press, and then across global news wires.
Indophil is the junior partner of Glencore Xstrata in the Tampakan project in the Southern Philippines. This project has long been resisted by many of the local B’laan indigenous people, and has been the centre of huge amounts of controversy. This is at least partly thanks to multiple human rights violations resulting from the attempts of various companies to push this project through against public opposition in a highly militarised area. You can read a range of articles on the situation here.