Soni Sori and the Battle for the Forest 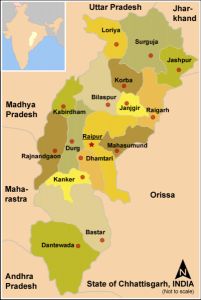 This guest post by Kerima Mohideen is the first in an occasional series looking at women involved in resisting the impacts of the international mining industry.
Eight per cent of the Indian population are Adivasis (Indigenous people),which amounts to over 84 million people. Chhattisgarh is home to 38% of India`s Adivasis. Historically, many were forced from richer farming areas onto more marginal, heavily forested highland areas. Now these lands are wanted by mining companies for the mineral resources they contain.  The  Chhattisgarh Mineral Development Corporation, claims that Chhattisgarh, along with two other Indian States has almost all the coal deposits in India as well as all the tin. It also claims that a fifth of iron ore in the country is found here, including large iron ore deposits in Bailadila in south Chhattisgarh.
Although fewer than 10% of adivasis live as traditional hunter gatherers, more than half are still economically dependent on the forests. From the time of the British administration, there have been laws regulating the ownership and use of the forests, and today most forest land has been effectively nationalized, with large areas contracted out to private commercial interests. Despite a hard fought and successful national campaign to win land title recognition of forests traditionally occupied by Adivasi peoples, the Chhattisgarh State and others refuse to recognise the change of law by refusing to register Adivasis’ titles to land.
Deforestation caused by large scale commercial projects, logging, large dams and of course mining is a serious threat to the Adivasi`s way of life and throughout India has led to an uneven and vicious conflict between Adivasis on the one hand and the private comercial interests and the Indian state on the other. In Chhattisgarh, this is complicated by an ongoing Maoist insurgency (as in a number of other Indian states) and the activities of the army as well as state sponsored para-military groups. Ordinary people find themselves living in situations of violence, intimidation, fear, accusation and counter-accusation.
In such an atmosphere, who dares raise their voice and speak out for the poor, the dispossessed, the rights of the forest peoples?

A report on the situation of Women and Girls in the state of Chhattisgarh by Dr Ilina Sen notes that
“unlike women in many other parts of India where the culture of exclusion and seclusion seems to prevail, women in Chhattisgarh are articulate,[and] visible”.
She argues that this is largely due to the important role women play in economic production, not only in agriculture but also the major role they play as the primary gatherers in the
“collection and processing of the many kinds of uncultivated foods and medicinal plants”  [found especially in the forests of Chhattisgarh.] “Women use these products for maintaining household food security and nutrition needs outside the market system. As such they are also the inheritors of an ancient knowledge system about food bio diversity”.
For these women, the loss of forest means not only loss of livelihood, but also loss of status. According to a 2009 article in Infochange about India`s then New Mining Policy,
” mining activity hitherto has neither brought any benefits to local populations nor has it shown any concern for the environment… in India, there exists an inverse relationship between mineral production and economic growth. Sixty per cent of the top 50 mineral-producing districts are among the 150 most backward districts of the country even after decades of mining.”
So-called economic development through mining of the mineral resources does not seem likely to improve the situation of women in Chhattisgarh. If anything, developing the mining industry is undermining what is a potential source of strength to women, their economic power, social visibility and confidence to speak out and determine for themselves the course of their social, economic and political development.
What happens when Adivasis raise their voices in protest? 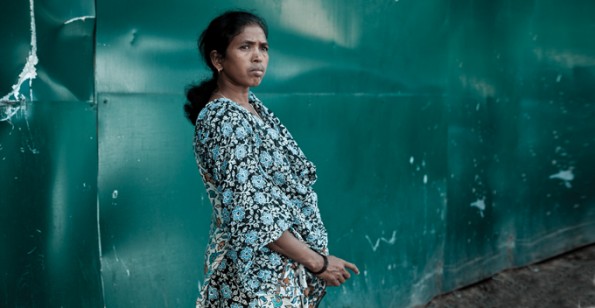 Soni Sori is an Adivasi woman, school teacher, mother of three children and an outspoken critic of both the mining companies and the state on the one hand and the Naxalites (Maoist insurgents) on the other.
In August 2011, wikileaks revealed that Indian transnational mining and energy company Essar paid protection money to Maoist insurgents to safeguard their iron ore slurry pipeline in Basta, south Chhattisgarh. Newly appointed district police superintendant Ankit Garg constructed a “conspiracy” framing Soni Sori and her nephew Lingaram Kodopi as the go-betweens between the company and and the Maoists.  On the 4th of October 2011, Soni Sori was arrested in Delhi, where she had fled from her home in Chhattisgarh in fear for her life. Three days later she was transferred to the jail in Dantewada in Chhattisgarh where there is compelling evidence that she was tortured and sexually assaulted at the command of Ankit Garg. Three months later, on Republic Day in 2012, Garg was awarded the Presidential Medal for Gallantry while Soni Sori continued to be held on a plethora of false charges including one in which she has been accused of being a courier.
The Chhattisgarh police have a long record of committing human rights abuses which is well documented by national and international human rights organisations. These abuses have been strongly condemned by the Indian Supreme Court. Thousands of under-trial (remand) prisoners languish for years in Chhattisgarh`s jails.
Pleas by national and international human rights groups to get Soni Sori released in time for International Women`s Day 2012 and 2013 were unsuccessful. Soni Sori and her nephew remained in custody with little hope of bail for an alleged crime for which there is no credible evidence. Both Essar and the Maoists deny that they were parties in the alleged extortion racket at the centre of this case and although local contractor BK Lala as well as Essar company manager DVCS Verma were also arrested at the same time as Soni Sori, both men were released on bail in early 2012. Meanwhile, Soni Sori, who as a mother of two of children under ten at the time of arrest should therefore under the Indian law have been presumed to receive bail, continued to suffer ongoing neglect and abuse in prison. During her time in prison she lost both her mother and her husband.
Soni Sori and her nephew Lingaram Kodopi were finally released on bail in November 2013. All the charges against her have been dropped except the alleged courier charge. In 2014, Soni Sori decided to stand for election for the Aap Aadmi Party (AAP – translates as Common Man Party). She lost to the local BJP candidate. Her life continues to be dogged by poverty, insecurity and danger but her spirit remains unbroken. She ended a recent interview for the Women`s Media Centre with the following words,
“My fight is not about caste or religion but about the rights of all women.
I know there are many who are waiting for me to die for this fight to end, but I want to tell them that if Soni Sori dies the fight will not end. There will be a hundred more Soni Soris who will emerge. Can they drown the fight for justice for women? Can they kill each one of us? In the end, victory will be ours.”
To find out more about Soni Sori`s time in prison and to read her letters from prison go to http://sonisori.wordpress.com/ and https://www.facebook.com/OneBillionRisingforsonisori