The Killing fields of Korba 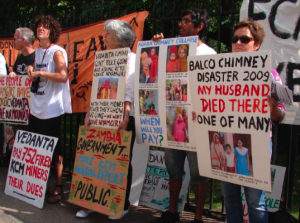 This article, by Nostromo Research, first appeared on the Mines and Communities (MAC) website on 6 August 2014.
It’s not often that MAC can offer a true “exclusive” – something no-one else has yet published and which addresses one of the worst industrial disasters of the past five years, occurring in India in September 2009.
At least forty workers perished in this event’ perhaps significantly more, but much of the evidence which might confirm this, was “lost” or destroyed shortly after the disaster.
Findings of a 32-month judicial Inquiry into the circumstances of the disaster were suppressed by a court order obtained by the very company which was primarily indicted for causing it.
That company is Vedanta Resources plc, which last week celebrated the 10th anniversary of its listing in 2003 on the London Stock Exchange (see: London Calling on Vedanta’s tenth anniversary).
The report can be downloaded as a pdf file here.
Editorial note: As stated in the following press release, the report was presented to Vedanta’s board at its 1 August 2014 AGM in London.
Chairman Anil Agarwal claimed that the report was “sub judice”. But it was pointed out that this ruling, made by a court in India, did not apply to the report’s publication in the UK (or indeed outside of India).
That point was accepted by Vedanta’s newly-apponted CEO, Tom Albanese, who confessed that he had only read “parts” of the report and promised that he would respond to it, once he had read it in full, along with ‘other’ reports into the disaster (which he didn’t name).
The Killing fields of Korba
Nostromo Research
5 August 2014
Almost five years ago, in September 2009, at least forty workers died when a chimney suddenly collapsed at Korba in the Indian state of Chhattisgarh.
The chimney was being constructed to serve a coal-fired power plant for the British mining company, Vedanta.
The following month, the state government set up a Commission of Inquiry into the disaster, under a regional and sessions judge, Sandeep Bakshi.
After an investigation lasting 32 months (sic), Judge Bakshi delivered his report to the government in August 2012.
It charged the chimney’s Chinese contractor, an Indian subcontractor. and Vedanta’s subsidiary BALCO, with numerous violations of safety regulations, poor construction methods and use of sub-standard materials.
BALCO was singled out by Judge Bakshi in no uncertain terms:
“Compliance with all the statutory requirements for the construction of the chimney was the responsibility of BALCO and the responsibility of determining the safety measures was also that of BALCO, because BALCO was the owner of the Project”.
Report suppressed
Soon after Judge Bakshi had submitted his report in its original Hindi, Vedanta went to the Chhattisgarh high court and secured a stay order on its publication, arguing that it did not afford BALCO a sufficient right of reply to allegations made in it.
And, last Friday, August 1, at Vedanta’s Annual General Meeting, company chairman, Anil Agarwal, insisted that the report remained “sub judice” in India.
Nonetheless, a copy of the complete report was leaked to London-based Nostromo Research earlier this year and then translated into English.
The report can be downloaded as a pdf file here.
This version was presented to the Vedanta board last week and it is now being released on-line
A full response from Vedanta to the extremely serious allegations contained in the report is now awaited.