Can ENRC save BAMIN? 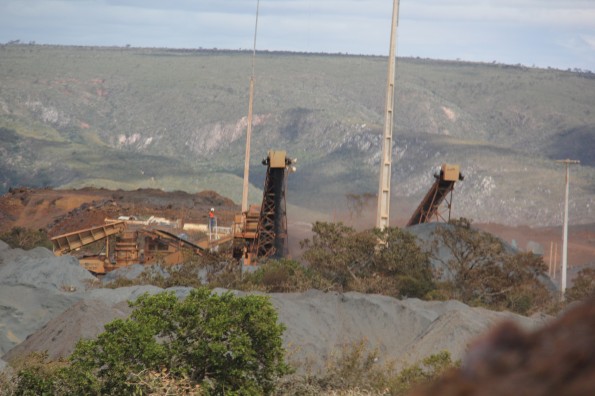 Glencore called its iron ore model “asset light” with a slim “resource profile” of shares in early-stage mines.
Among its “off take partners” were named West African producers London Mining, African Minerals, and Bellzone, as well as a US-focused magnetite producer, Strategic Minerals.
In June 2014, Glencore also provided an example of the political influence it could wield to promote the fortunes of another of its mineral assets. It signed a long-delayed deal with the Mauritanian state-mining company, SNIM, enabled it to start exploiting the Askaf iron ore mine.
In exchange for doing this, Glencore was allowed to use Mauritania’s existing rail, port and storage facilities, to export an estimated 7.5 million tonnes of iron ore a year. [Reuters 2 June 2014]
The Brazilian “lure”
Glencore has identified a 4% stake that it holds in Brazil’s Ferrous Resources which, combined with an off take agreement, it has said will “giv[e] it the potential to grow in Brazil” [Steel First 12 September 2013]..
Ferrous Resources has three operating iron ore mines in the state of Minas Gerais, and proposed construction of another one in Bahia, unrelated to BAMIN. For its part, Ferrous Resources appears still to be working on what it terms an “integrated logistics system”. This includes the development of a slurry pipeline across three Brazilian states, as well as “the construction of a new port terminal in Espirito Santo”.
This plan is akin to the existing infrastructure system used by Vale-BHP Billiton’s joint venture Samarco. Over 20 million tonnes a year of iron pellets and concentrate is produced at their Germano mine in Minas Gerais, then slurried through a 396 kilometre pipeline to the Ponta Ubu terminal in Espirito Santo.
To an extent it also compares with BAMIN’s design for Pedra de Ferro – the main difference being that this scheme does not (at least as yet), envisage slurrying production to port.
Australian and Brazilian “material” last year made up more than 60% of Glencore’s marketed ore tonnages, with West African material accounting for 20%, and Canada and the rest of the world the remaining 18%. [Steel First ibid].
There’s no question that the firm will remain committed to making deals in Brazil and Australia; after all, these are by far the world’s two leading iron ore producing countries. But we shouldn’t leap to the conclusion that Glencore is seriously considering bidding for BAMIN. It already has sufficient commercial producers to choose from.
One of these is Anglo American plc, which has “long been tipped as a possible takeover target” by Glencore [Steel First ibid]. In fact, there’s hardly any prospect of Glencore bidding for its fellow London-listed miner in the near future [Moneyweb 4 September 2014].
Nonetheless a core part of Anglo American’s portfolio is one of the most promising iron ore projects in Brazil, called Minas Rio, and this was certainly on Glencore’s horizon soon after it was permitted to open.
Anglo American says Minas Rio will enter commercial production in the latter part of 2014, with output rising to around 25 million tonnes a year.
That’s a far cry from from the prediction of Anglo’s then-CEO, Cynthia Carroll, back in in 2007 that it would produce “over 100 million tonnes [of iron ore] a year within five years” [Financial Mail 11 October 2013].
Minas Rio has suffered massive cost overruns, amounting to nearly US$ 9 billion – more than five times what Anglo American paid to acquire 49% of Minas Rio, along with a subscription of shares. During the 2012-2103 financial year, Anglo American had to write down the value of Minas Rio by no less than US$4 billion after tax [Financial Times 29 January 2013].
In October 2013, Charlotte Mathews, wrote in South Africa’s Financial Mail: “It is highly doubtful Anglo American would have embarked upon the ambitious US$8,8bn Minas Rio iron ore mine, pipeline and port in Brazil in market conditions like today’s” [Financial Mail, 11 October 2013]. (see also Chapter Four: Ports in a Storm).
Trading places
Almost a year on and those market conditions have become far worse (see Chapter Three).
Glencore, or any of its rival commodities’ trading conglomerates, would be extremely foolhardy to mount an outright takeover of BAMIN.
On the other hand, there is a distinct possibility that one or other of them might sign an iron ore delivery contract – a so-called “off take agreement” – with BAMIN, but only if and when commercial production (reaching, say, 10 million tonnes a year) starts.
During summer 2014, Metal Bulletin reported that ENRC had “held talks with five of the world’s largest metal trading firms to outsource marketing rights to its products in exchange for pre-financing of material” [Metal Bulletin, 9 July 2014]. These firms were identified as Trafigura (second only to Glencore as a global metals trader), Traxys, Mitsui , Noble and Glencore itself.
Some of these discussions were conducted in the first quarter of 2014, “but may have slowed or ended because ENRC secured more favourable terms from its banks without the involvement of the trading houses”, reported Metal Bulletin.
Of course it is equally possible that it was Glencore and fellow traders who cooled on any “offers” that may have been put forward by ENRC, rather than the company itself. There is no evidence that the Kazakh oligarchs got anywhere with the banks.
And just what would the “pre-financing [of] material” mean in practice?.
The fact is the Caetite mine still has a long way to go before reaching a very modest annual output of one million tonnes a year. Many months are likely to pass before adequate rail and port transport were available to move that product to foreign customers.
Glencore and its rival global players aren’t fools and – to coin a phrase – they “never count their chickens before they are hatched”.
Pedra de Ferro is not a “Golden Egg”, by any stretch of the imagination. In reality, the egg hasn’t even yet been laid.
Article provided by Nostromo Research
For all LMN articles on the Porto Sul project, see https://londonminingnetwork.org/?s=Porto+Sul.
For more information, contact Acao Ilheus at ismailabede@ig.com.br.