The Stop Mad Mining coalition has handed over your 41,675 signatures that call on the EU to tackle the deadly trade 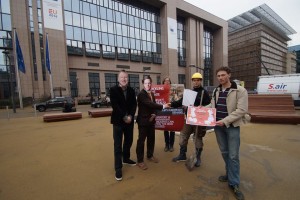 in conflict minerals (see: https://londonminingnetwork.org/conflict-minerals-petition/). The hand-over took place in Brussels, first to Roland Roosdrop from the Dutch Ministry of Foreign Affairs, Presidency of the EU Council, representing the interests of the 28 EU member states in the ongoing EU (trialogue) negotiations. Then they were handed to EU Commissioner of Trade, Cecila Malmström, before engaging in a symbolic petition handover to the Dutch Prime Minister Mark Rütter and MEP Bernd Lange (Social Democrats) at the latest trialogue meeting.

Thanks to all of you who supported the petition, especially in the UK our member groups Global Justice Now and War on Want.

Stop Mad Mining Press Release
4th April 2016
Brussels – On April 5th EU Parliament and Commission will meet in Brussels with the Dutch Council Presidency for their second trialogue negotiation over a conflict mineral regulation. Before the meeting the Stop Mad Mining network will hand over the petition “Tackling the trade in conflict minerals!” signed by almost 42 thousand people, who demand an EU regulation with mandatory due diligence, which meets the OECD standards as a minimum.

“Whenever we buy a phone, a computer or a car, we run the risk of fuelling a conflict in the Global South. We cannot know whether they contain conflict minerals or not”, explains Michael Reckordt from the NGO PowerShift. Reckordt adds: “Europe still lacks a mandatory and comprehensive law that tackles this deadly trade.”

Armed groups in high risk areas like the Democratic Republic of Congo (DRC), Colombia and Myanmar are financed by selling the minerals: Gold, tantalum, tin and tungsten (3TG) make their way into phones, laptops and cars that EU citizens buy every day.

“It is a shame for Europe to not have any law on that issue, while the deadly trade with minerals continues fuelling conflicts worldwide”, says Anna Backmann from the German NGO Christliche Initiative Romeo (CIR). According to Backmann “the OECD has proposed a methodology for due diligence that was recently implemented by China.” The USA have a comparable law in Section 1502 of the Dodd-Frank Act that focuses on the DRC and neighbouring countries. In their recent field study the US, American NGO ‘Enough Project‘ proved positive effects of the US-law.

Lala Hakuma Dadci from the French NGO Aitec claims: “We and 42,000 people call upon EU Member States to match Parliament’s commitment to break the link between conflict financing and metal sourcing, by supporting binding due diligence requirements.” According to Hakuma Dadci “that could have a real and positive impact on the trade in minerals and on the violence and harm associated with mining in some of the world’s poorest areas.”

The ‘Stop Mad Mining’ network argues that this is precisely why a strong, mandatory due diligence regulation is required to ensure all companies importing ores, metals and products containing these materials into Europe check their supply chains. For the handover Stop Mad Mining will be supported by ‘CIDSE‘, based in Brussels, who have just launched their own petition on conflict minerals.

In a huge step forward, the European Parliament voted on 20th May 2015 for a strong and binding regulation. It would require companies bringing 3TG products into the EU — in any form — to source them more responsible.
The final legislation will be decided in the currently ongoing ‘trialogue meetings‘. These are negotiations between the European Parliament, the EU Commission, and representatives of Member States. In the forefront European Member States together had to agree on a common Council position. Then the three EU organs entered into the negotiations in order to reach an agreement between the Commission’s business-friendly draft and the human rights-based parliamentary draft.
Stop Mad Mining represented by CIR and PowerShift from Germany and AITEC from France will hand over the petition during the second Trialogue meeting on 5th April to political decision-makers.
CIDSE, based in Brussels, have just launched their own petition on conflict minerals here: http://www.justicepaix.be/conflict-minerals/
In May 2015 almost 300 thousand people signed Walkfree’s petition on conflict minerals https://www.walkfree.org/tackle-conflict-minerals-trade/
The EU imports 16% of the global supply of tin, tungsten, tantalum and gold , which is linked to the production of technology products. In addition EU companies import these metals indirectly in consumer and industrial products, such as laptops and smartphones.
The study of the US-American NGO ‘Enough Project’ proves positive effects of the US law http://www.enoughproject.org/files/DRC_PointofOrigin_022016.pdf.
For more details, with petition text, see: http://stop-mad-mining.org
For more information on the conflict minerals issue in general see: https://www.globalwitness.org/campaigns/conflict-minerals/