Last year LMN posted a blog about Earth Overshoot Day, which is the day where the citizens of Planet Earth calculate when we will have used more from Nature than our planet can renew in the whole year. 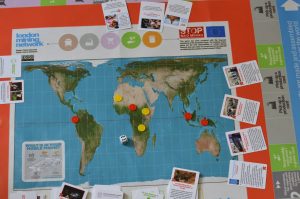 LMN game: How well do you know your mobile phone?

Last year we posted our blog on 8th August. Today we are posting it on 2nd August. This is scary. We know that in recent years the chosen day is getting earlier, but a jump of almost a week shows how unsustainable our current level of consumption is.
The day has never fallen so early since the measure has been calculated starting in 1986 . Currently it is estimated that we would need the equivalent of 1.7 planets to produce enough natural resources to match our consumption rates and our growing population. (For those unfamiliar with the concept, there is a simple video here).
Given LMN’s concern with minerals, it is important to note how the (over) consumption of minerals are part of this equation. Much of this is down to the desire to upgrade electrical gadgets before it is strictly necessary. To help address this issue the LMN Stop Mad Mining project sponsored the creation of an educational game which asks the players how well they know their mobile phone.
The game starts from the position that mobile phones, and other similar gadgets, are useful and desirable inventions which can enhance, and even save, lives. However, it also aims to share information on the environmental and social injustices caused by the production and disposal of such gadgets. Although there is an obvious focus on the metals that go into phones, and the problems associated with their extraction from around the world, the game also looks at unfair work practices and issues of the recovery of phone parts under unsafe conditions.
The game aims to encourage a debate so that young people should think about how phones can be produced, and disposed of, without causing such damage to people and the environment. The solution cannot just be as simple as using Fairtrade phones or the recycling of minerals in old phones, as both can have their own problems.
The intention is that people will – aside from having fun – complete the game with the sense that there are a multiplicity of solutions and that while some might be simple and immediately implementable, others will require further research, discussion and perhaps future technical training. We hope that young people will come away with a sense that they can be part of that solution.
It may only be a small contribution to a big problem, but consideration of personal consumption is a vital part of any answer, and if we want to turn Earth Overshoot Day clock back such solutions will be needed.
For those wanting to know more about the game please email: education@londonminingnetwork.org