Visitors from three of the thirteen countries that BHP operates in have come to London in search of accountability for the company’s operations in their respective homes. These range from the fall-outs of the widely-known Samarco dam disaster in Brazil, to the forced displacement of communities surrounding the Cerrejón coal mine in Colombia and the proposed Rio Tinto/BHP mining project, the Resolution Copper Mine in Arizona, USA.
Read the demands from each of the communities and join the events during the week, including the demonstration outside the BHP AGM.
Luisa Rodriguez Gaitán is a Colombian sociologist with a Masters in Human Rights and Democratization in Latin America and the Caribbean. She is Advocacy Advisor for the Intercultural Education Project for the Defense of the Rights of Ethnic Groups in the La Guajira, Cartagena and Sierra Nevada de Santa Marta regions of Colombia and she is part of the Mobilisation, Territory and Intercultural Team of CINEP. Since 2012, Luisa has worked with national organisations and local bodies such as Fuerza de Mujeres Wayuu (the Wayúu Women’s Force) and Afro-descendant community councils in the northeastern region of La Guajira, to promote the rights of the indigenous Wayúu, Afro-descendant and peasant communities. 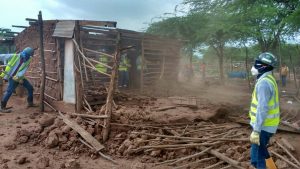 CINEP – The Centre for Popular Investigation and Education was founded in 1972. It works for a more just, equitable and peaceful society through its research, advocacy, education and collaboration with communities and grassroots organisations. It promotes human rights and integral and sustainable human development in different regions of the country, including the Caribbean region. Alongside community groups, CINEP also raises awareness about the social, economic, cultural and environmental impacts of coal mining in La Guajira and the northern Colombian region of Cesar.
Ángelica Ortiz is a Wayúu woman from the Lomguato Reserve, Hatonuevo in La Guajira. Secretary General of the Wayúu Women’s Force, she is a delegate of the strategic alliance between Wayúu, Afro-descendant and peasant groups defending the water resources of La Guajira. Ángelica is also a delegate of the National Council of Indigenous Women of Colombia CONAMIC and coordinator of the Indigenous Women’s School and Other Forms of Wisdom. She is currently a gender adviser for the CINEP Intercultural Education Project.
Sutsuin Jiyeyu Wayúu Association, Wayúu Women’s Force, SJW-FMW is an organization in Colombia that raises awareness about the violations of human and ethnic rights in La Guajira. The organisation emerged in 2005 with the aim of defending the rights of the Wayúu people affected by paramilitary violence in the region. By expanding its focus and dealing with the effects of mining in their territory, the organisation started to work for the promotion, protection and defence of the rights of indigenous women and the human right to water. It denounces the territorial impacts of mega-mining projects, including forced displacement.
Rodrigo de Castro Amédée Péret is a Brazilian Franciscan brother who works with communities affected by environmental impacts and human rights violations caused by mining activities. He has been involved in the struggle for agrarian reform in Brazil for over 30 years. Rodrigo is a member of the Churches and Mining Latin America Network board, coordinator of the Franciscan Solidarity and Ecology Action and a member of Franciscans International, an NGO at the UN.
Thiago Alves da Silva is a Brazilian journalist from the Federal University of Viçosa and is part of MAB’s regional coordination committee in the southeastern Brazilian state of Minas Gerais. He is from one of the communities devastated by the 2015 Samarco tailings dam collapse.
The Movement of the Affected by Dams (MAB) is a national movement in Brazil; an autonomous mass struggle with collective leadership at all levels, regional groups and does not distinguish between people on the grounds of sex, colour, religion, political party or education. The history of the organisation has been one of resistance, struggle and achievement over the past 20 years. It is a national movement in defence of human rights, in defence of water and energy, and in the construction of a national grassroots political movement. Guided by the ‘pedagogy of example’, its struggle is nourished by the deep feeling of love for people and life.
Roger Featherstone is Director of the Arizona Mining Reform Coalition. The Coalition works to reform national, state, and regional rules and regulations governing hard rock mining and supports coalition members to stop inappropriate mines in Arizona. Roger is founder and producer for the GreenFire Project, an educational and inspirational organization that promotes wilderness values. He has also been involved with Northern Thunder for the past 33 years, a Wisconsin-based community environmental organization.
Arizona Mining Reform Coalition works in Arizona to improve state and federal laws, rules, and regulations governing hard rock mining to protect communities and the environment. AMRC works to hold mining operations to the highest environmental and social standards to provide for the long term environmental, cultural, and economic health of Arizona. Members of the Coalition include Local, indigenous, grassroots and national organisations.
Roy Chavez is the chairperson for Concerned Citizens & Retired Miners Coalition (CC&RMC), a grassroots, non-profit volunteer organization opposing the proposed Rio Tinto/BHP mining project, the Resolution Copper Mine (RCM), near the Arizonian town of Superior. A lifelong resident of Superior, Roy has served his community as council member, mayor and town manager. From 1973 to 1996, he worked for several different mining companies in the central mining region of Arizona, including BHP, Kennecott Copper, Magma Copper and HECLA Mining.
The Concerned Citizens and Retired Miners Coalition is a group of citizens who reside in Superior, Arizona or are affiliated with relatives who are residents. They are retired hard-rock miners who previously worked in the now non-operational mine in Superior and were displaced due to mine closure or personal disability, or they are individuals who are concerned that important US public recreational land will be conveyed to a foreign mining company for private use. Although this group somewhat supports the mining industry as a regional economic base, they completely oppose the RCM method of Block Caving mining and the resulting environmental destruction if this project moves forward.