'I see that people are sad': Samarco report summary 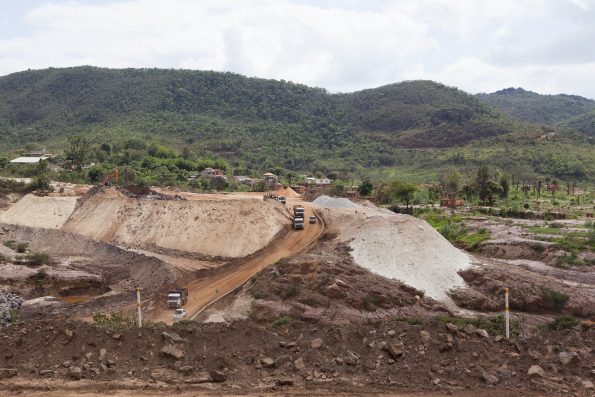 Just before BHP’s annual general meeting on 19 October, London Mining Network published a report into Brazil’s Samarco dam disaster which devastated communities all along the Rio Doce river system in Brazil. Around 1.4 million people are seeking urgent action to remediate ecosystems and restore livelihoods. Samarco is a joint venture 50 percent owned by BHP.
“I see today that people are sad. Sad because they are not living in their own houses; they do not live in their old neighbourhood; they have lost their living space and do not even see a deadline for the start of a solution. People are sick and discouraged. There comes the weeping, the sadness, the depression.” Magaly Lanna, retired teacher and affected person in Barra Longa, a community devastated by the Samarco dam disaster.
On 5th November 2015, the Fundão tailings dam in the Mariana District of the state of Minas Gerais, in Brazil, operated by the Samarco mining company, suffered catastrophic failure and released a total of 45 million cubic metres of mining waste. This is the largest area of a river basin ever affected by a tailings dam collapse (over 600 km). It is also the largest ever spillage from a tailings dam. The waste material scoured large parts of the Doce river valley, possibly activating other pollutants including wastes from other mines. Farmland has been covered with waste and rendered unproductive. Water sources have been fouled. Fisheries have been destroyed. Many people who depended on the river for their livelihood, (in fishing, farming or tourism) consider that the river is dead.
The River is Dead: the impact of the catastrophic failure of the Fundão tailings dam, by researcher Paul Robson, examines the impacts on people’s lives through loss of loved ones, homes and livelihoods, and the limited and inadequate efforts of Samarco’s owners to deal effectively and transparently with those impacts.
Two delegates from Brazil, journalist Thiago Alves da Silva, from the Movement of People Affected by Dams (MAB), a coalition of local communities impacted by Brazil’s dam projects, and Franciscan brother Rodrigo Peret from the Churches and Mining Network, will be in London to call out the mining giant’s lack of accountability since the spill.
Lindsay Newland Bowker, of Bowker Associates Science and Research on the Public Interest: “This work by LMN and others preceding it in Brazil in compiling and summarizing all the unreported scientific study done in the wake of the failure, stands in sharp contrast to what BHP and Vale have represented and continue to represent even after their own consultants’ report says otherwise. So far, all that BHP has done is pledge to create a corporate-wide tailings management policy and retain adequate skilled staff for framing, implementation and oversight. The response to what is documented here by London Mining Network remains denial and avoidance. What London Mining Network have done with this remarkably insightful and eloquent study is take over community control of the narrative on consequence and duty to take responsibility.”
Researcher and report author Paul Robson: “People affected by the impacts of the dam collapse do not know what their future will be as they have lost their livelihood: they do not see how they can continue living without their land or the livelihood that they have had for many years. Communities who have been previously impacted by major changes to their lives (such as people previously displaced by hydro-electric dams) know that adapting to making a living in a new location is a long and painful process.”