Protesting the Mines and Money Conference 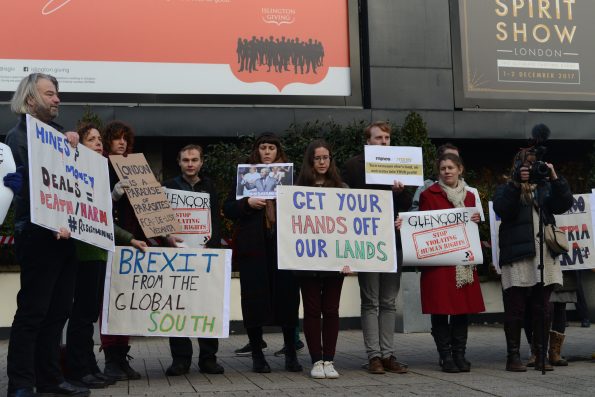 Late last November, the annual Mines and Money Conference took place in London, bringing together mining companies and mining financiers. London Mining Network and member groups Gaia Foundation and War on Want, assisted by member group Colombia Solidarity Campaign and others, hosted activists Camila Mendez from Colombia and Clemente Bautista from the Philippines in protest against the event. Our friend Alice Kazimura from Uganda was denied a visa to visit the UK for the event – the second time in a year that friends of ours making a living as small-scale farmers from Africa were denied entry to the UK, which we consider an outrage and an injustice.
A demonstration was held outside the Conference venue while Nigel Farage gave the keynote speech to the conference, and a tour of mining and finance company offices in London’s West End was held. Our visitors also met with journalists, NGOs and parliamentarians while in London.  We made a short video of the protests.
Against arguments that ever more, ever larger industrial mining projects are needed to support the ever growing population of the world, it may be worth reading, or re-reading, a report produced in 2016 by the Gaia Foundation: Mining – when is enough, enough?