On 10 April, Secretary of State for Communities, Sajid Javid and his colleagues were greeted with a life-size statue depicting the Secretary of State ‘turning a blind eye’ to the imminent expansion of opencast coal mining in the UK.
The statue’s creators, Art Rise Up, said they were inspired to create the work and present it to Mr Javid after visiting the Pont Valley in County Durham, where local residents and national campaign organisations including 38 Degrees are contesting an imminent new opencast coal mine, set to go ahead this spring.
The collective Art Rise Up, in a statements on t 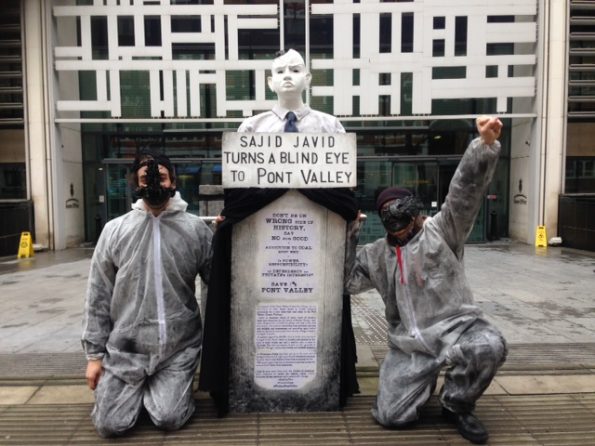 heir facebook page says ‘This is how will be remembered if he does not step in now to stop all new opencast coal mines; as someone who failed to prevent permanent damage to communities and the environment they depend on, all for the benefit of dirty fossil fuel companies. With the use of a critical neoclassical bust, we intend to underline the responsibility of governments and power figures in handling the Climate Crisis. A call for politicians to re-think the meaning of providing community welfare beyond exploitative models.‘
In February a petition saw over 88,000 people urge Javid to use his powers under the Town and Country Planning Act to revoke the permit for opencast coal extraction, held by Banks Group. Banks Group announced they had acquired the permit to mine at Bradley in the Pont Valley from the liquidated company UK Coal, and intended to start opencasting in spring 2018. UK Coal had secured permission in 2015 after a 30 year battle with local people over the proposals who previously defeated the proposals at three public inquiries.
On the grounds of climate change, Javid last month refused a separate planning application for opencast coal extraction in Druridge Bay, Northumberland, lodged by the same company.
Banks Group’s application to mine at Highthorn, beside Druridge Bay was approved by Northumberland County Council in summer 2016 but was called in by Sajid Javid who refused the application after an inquiry on the basis of climate change, landscape and heritage site removal.
Anne Harris of Coal Action Network commented, ‘Opencast coal hurts communities and causes climate change, no matter where it is dug up and burned. If Javid is serious about upholding the UK’s climate commitments then he must urgently revoke Banks’ permit to opencast the Pont Valley.’
In the absence of a response from Mr Javid, local residents and activists launched a direct action camp to prevent Banks Group from entering the site to start the opencast mine. The camp has prevented the preparatory work starting since 19th March. Durham County Council planned roadworks schedule shows 19th March Banks Group intending to build the access road to the proposed site on the A692. 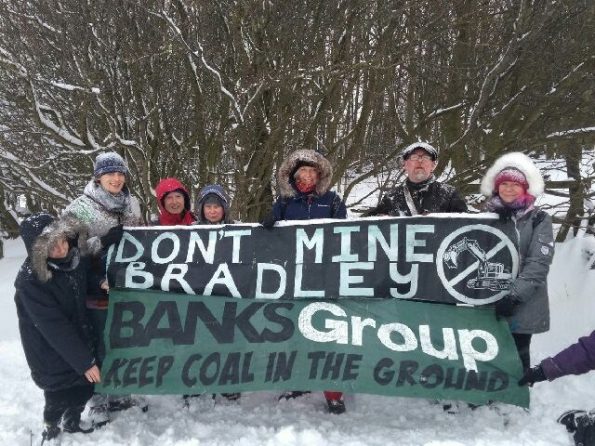 Thomas Davison, a local resident living 300 metres from the contested land, said ‘After over 30 years of successfully fighting through the planning system we’re now resorting to petitioning the Secretary of State as  well as establishing a protection camp in the Pont valley as a form of peaceful direct action.
‘The Pont valley provides far more to this community than opencast coal extraction ever could. As children we grew up here with rich wildlife to explore on our doorsteps and a wonderfully beautiful setting for our working lives. So much history and so many stories have been shared between those who have come out in support of the camp. The valley is a huge part of the community’s identity. Sajid Javid must do what’s right for communities, a community that has always said no to opencast – that’s his job.’
Laura Pidcock, Labour MP for North West Durham pledged her support for the ‘Campaign to Protect Pont Valley’, and has requested an urgent meeting with Mr Javid.
The artists behind the statue are members of Arts Rise Up, a collective which aims to merge art and activism. Our purpose is to tackle political and social issues of our times using art forms such as Performance, Fine Arts and Multimedia. We intend to embody a plea for change, supporting key campaigns with critical artwork.
Sajid Javid sculpture, has been conceived in collaboration with The Nave, a community of creatives promoting social consciousness.
Text and photos by LMN member group Coal Action Network