It is annual general meeting season for the many London-listed mining companies enjoying the spoils of extractive operations in mostly global majority countries such as Brazil, SouthAfrica, Colombia and Chile. It is when suits and ties file into conference venues and boardrooms to talk about how responsible and ethical a company is, before the CEO or chairperson reports on recent mine worker deaths or environmental catastrophes that have occurred in the last year or what, if any progress has been made, since the event. “Last year saw fewer deaths than the year before”, or “the safety of our employees and local communities is our number one priority” are often embarrassed qualifiers to bad news.
Luckily, at most of these meetings, there is a handful of nominal shareholders posing difficult questions, perhaps handing out flyers on the company’s human rights violations, and often supported by noisy protesters outside demanding accountability. Some have travelled from affected communities to share their experiences of resisting the exploitative and colonial nature of mining, while others are there in solidarity, to hold companies to account because of their links with the capital, the global financial hub.
Wednesday 23rd May sees Chilean copper mining company Antofagasta’s AGM. Antofagasta is one of the largest companies listed on the London Stock Exchange with most of its operations in Chile.
This Latin American country has the highest number of mining recorded conflicts in the continent. Control over the country’s reserves has long been a key political issue, with the power over mining regulation firmly in the hands of big business.
Antofagasta operates the Los Pelambres copper mine in north central Chile. This mine stores its tailings (waste) in water contained by the company’s El Mauro dam; a 470-foot-tall wall that stretches nearly half a mile straight across the valley and is the largest tailings dam in Latin America. It is located above the small town of Caimanes where residents are struggling with water shortages.
Desalinatio 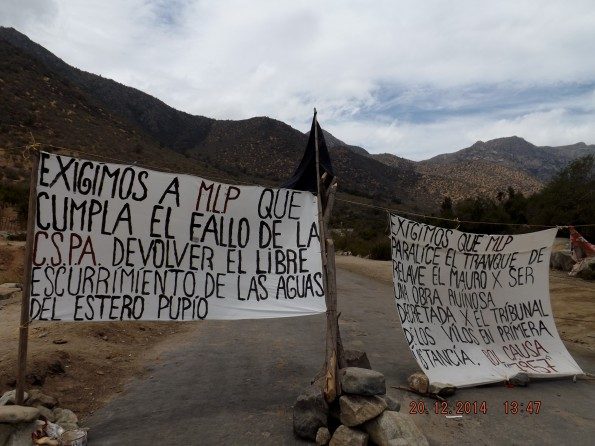 n: water fit for human consumption?
In February this year, a commission, called the Environmental Evaluation Commission of Coquimbo, approved a plan for the Los Pelambres copper mine, projected to cost over a hundred million US dollars. The plan means that the mine could maintain the current level of recovery of copper despite a lowering of the quality of the ore – in other words, more rock will be dug up to get the same quantity of copper.
A desalination plant, using water from the Pacific Ocean, will be developed as part of the plan, necessary because local water sources in the Choapa Valley, where Caimanes town is located, are in danger of exhaustion. El Mauro dam holds enough leftover processed rock to fill 140,000 Olympic swimming pools, according to Reuters, but Antofagasta blames years of drought for the evaporation of the water resources.
The aim of the desalination project is to provide water for both mining and human consumption. But desalination has been the subject of repeated controversy in the area, amid concerns that the water produced will be unsuitable for human consumption. A question that will be asked tomorrow is how the company will ensure that desalinated water around the Pelambres mine will be safe to drink and use, and, if this water will also be made available for agricultural purposes.
Antofagasta was granted an environmental license by the Chilean government in April 2004, on the condition that the company maintain the quality of water in the surrounding Pupio river and estuary downstream of the Pelambres mine. The production of desalinated water seems unlikely to fulfil this obligation, given that the environmental licence obligation relates to the flora and fauna in and around the river as well as the quality of water used by the local community.
Bribery and corruption
In 2016, Chile’s public prosecutor began investigating former government minister Jorge Insunza for bribery and tax offences. Mr Insunza apparently provided reports for Antofagasta while he was a Member of Parliament during 2007-10 and from 2014 onwards. He participated in voting on matters including mining and water issues, which directly benefited Antofagasta Minerals, the Chilean subsidiary of London-based company Antofagasta plc. “What has become of the investigations?” ask the shareholders urging accountability of the company.
Also in 2016, the Chilean government allegedly helped Antofagasta get away with dumping potentially contaminated waste over the border in Argentina’s San Juan Province, according to a leaked email exchange between Chilean Mining Minister Aurora Williams Baussa and Antofagasta Minerals representatives. Williams is the former manager of administration and finance for Antofagasta.
In 2004, the Chilean government gave Antofagasta Minerals permission to install a dump for depositing rock debris and other waste materials from the Los Pelambres mine. Between 2007 and 2012, the company dropped 55 million tons of mining waste in Chile’s Cerro Amarillo dump, before it emerged that over 52 hectares of landfill had been dumped in Argentina – in the San Juan Province’s El Pachon mine, which is run by Swiss company Glencore, also a London-listed company. In 2016, the San Juan Province government made an agreement with Antofagasta to ‘isolate’ rather than get rid of the dump site.
This agreement has been contested by Argentinian politicians through bills and legal proceedings. To add insult to injury, tests on the waste to check for contamination were found to have been carried out by a private consulting firm paid for by the mining company itself, and as such, carry little weight.
The waste rock is apparently causing acid mine drainage around the site where it has been dumped in Argentina. Campaigners have questions about this: did the San Juan authorities give permission to dump the waste rock in San Juan? What is the current state of legal proceedings in the matter, and what are the likely financial consequences for Antofagasta?
Will those in charge answer these questions honestly, and mean what they say when professing their commitment to the local community? That remains to be seen.
For further information and quotes about London’s role in the mining sector, contact Richard@londonminingnetwork.org