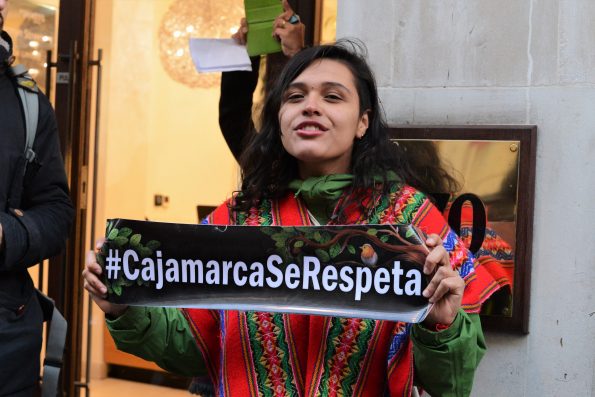 Picket outside Colombian embassy in solidarity with environmental defenders
Carnival for Water – Life – Territory
8 June from 3:30pm – 5pm
3 Hans Crescent
London SW1X 0LN
Nearest tube: Knightsbridge station
Let’s stand with Colombians who mobilise for water, life and territory! On 8th June, thousands of people will join the Marcha Carnaval in cities throughout Colombia, including Ibagué, Armenia, Florencia and Bogotá. Students, workers, women’s groups, environmental activists and human rights defenders will come together to demand that Colombian government respects the right of local communities to ban mining and fracking in their territories.   We will be at the Colombian embassy to show our solidarity and amplify environmental and social movement demands. We will
• Demand respect for the Cajamarca referendum in which 98% voted against a large-scale gold mining project called La Colosa.  This project, owned by mining company AngloGold Ashanti, would cause extensive environmental damage in this biodiverse region.
• Express our concern that the Colombian government is blocking future attempts of local communities to organise local referendums against mining and fracking in the second most biodiverse country in the world.
• Express our horror about the impending Hidroituango dam tragedy, and demand investigations for the recent assassinations of activists denouncing the irresponsible project.
• Express our support for activists and community leaders who are being assassinated and threatened throughout Colombia ‒ the third most dangerous country in the world for land and environmental defenders.
• Commemorate the one year anniversary of the Buenaventura Civil Strike, and show our support for the process.
• Express our concern about the contamination resulting from petroleum extraction in Putumayo.
• Express our concern about the alarming rate of logging in the Amazon. In 2017, it is estimated that an area of rainforest the size of Switzerland was destroyed.
Help spread the message on 8th June: #CajamarcaSeRespeta [The hashtag in Spanish reads “Cajamarca should be respected”]
Organisers: Colombia Solidarity Campaign and London Mining Network