Foil Vedanta(1) and a coalition of organisations have released a damning report ‘Vedanta’s Billions: Regulatory failure, environment and human rights’ days before Vedanta Resources’ AGM and de-listing, described by Hywel Williams MP as ‘deeply concerning and disturbing’. The report gives a comprehensive account of legal judgments against Vedanta across its global operations, and blames the City of London and Financial Conduct Authority (FCA) for failing to regulate or penalise the company, which is the latest in a long list of London miners linked to ‘corporate massacres’. A protest will be held at the FCA headquarters in Canary Wharf at 11am on 1st October demanding that British regulatory authorities do not let Vedanta flee the London Stock Exchange without being held to account.
Loud protests will be held outside the final London AGM of Vedanta Resources(2) at 2pm on Monday 1st October at the Lincoln Centre, Lincoln Inn Fields, London. Protesters inside and outside the meeting will demand justice for victims of the  massacre of thirteen protesters against Vedanta’s copper smelter in Tamil Nadu in May, and draw attention to the high profile British and Indian figures who have lent the company support over the years. 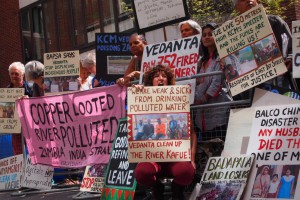