I hope to see many of you at our annual gathering on the evening of Wednesday 26 June. Do come and hear from our guests Siti Maimunah and Volker Boege about the legacy of UK mining company Rio Tinto in Bougainville and Indonesia, and learn more about our work.

Recently we attended the AGM of Antofagasta and, as usual, did not receive the kind of full disclosure that we wanted. We also protested at the final shareholders’ meeting of Lonmin, which approved a takeover by South African company Sibanye Stillwater.

Our friends in LMN member group Coal Action Network joined others in presenting a petition to the UK government to revoke permission for an opencast coal mine at Druridge Bay in Northumberland and stop work at the Bradley mine in Pont Valley, County Durham. Below you will also find an article about the environmental dangers posed by mining for supposedly ‘green’ transport and articles about the problems with cleaning up the Ranger uranium mine in Australia and the impact of uranium mining on indigenous communities elsewhere. It is clearly not sufficient simply to stop using coal (though we must stop using coal): we have to find ways of getting by with less mining. 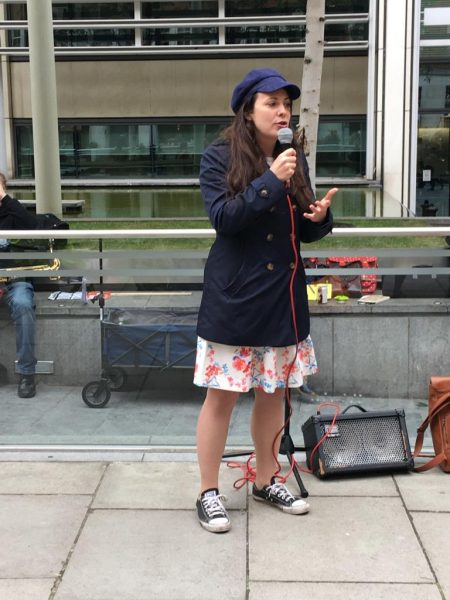 Under pressure from institutional investors led by the Church of England, some mining companies, among them BHP, have begun revealing the state of their tailings (fine wastes) dams, and it is not good news.

A new report from OECD Watch and the Business and Human Rights Resource Centre shows that people who make complaints using the OECD’s complaints mechanism often face reprisals – particularly if they are complaining about mining or agriculture. Companies involved in coal mining in Colombia have denounced recent death threats against their critics; but the threats continue and we received news yesterday that one such threat, against a member of an indigenous organisation in La Guajira, has been carried out. We are distressed at the news. The victim was not personally known to LMN; many of the others threatened are our friends.

So, join us on 26 June and find out how you might be able to get involved in the struggle to protect the planet and the planet’s defenders!

Find out about our work and hear from visiting speakers talking about the legacy of London-listed Rio Tinto’s mining in Bougainville and Indonesia. Environmental damage caused by Rio Tinto’s Panguna mine on the island of Bougainville helped spark a war for independence from Papua New Guinea in the early 1990s – this year there will be a referendum on independence. Clean-up of wastes from the company’s closed Kelian mine in Indonesia has been presented as a good example but research by our colleagues in Indonesia shows it in a different light. More information and sign-up here.

FREE film screening as part of a conference on Art and Cinema in 21st Century Peru. With multi-award-winning Director Ernesto Cabellos in attendance for discussion.

“Coal is our Heritage, not our Future”

Last week people from three different campaigns against opencast coal joined together to hand in a 113,000+ signature petition to James Brokenshire, Secretary of State for Housing Communities and Local Government, urging him to revoke permission for Druridge Bay and stop work at ‘Bradley’ in the Pont Valley.

A petition with almost 45,000 signatures on it demanding an end to plans for an opencast coal mine at Druridge Bay in Northumberland has been submitted to the government. Protesters from Friends of the Earth gathered outside the Ministry of Housing, Communities and Local Government and carried placards reading ‘Save Druridge. No opencast coal’. They then took part in a mini-march to hand in the petition, which urges Housing, Communities and Local Government Secretary James Brokenshire to reject the construction of the proposed mine.

Ahead of its Annual General Meeting on June 13, UK gold mining company, Acacia Mining, was facing increased pressure to address human rights concerns at its North Mara gold mine in Tanzania and to suspend the company’s problematic grievance process.

3) Vedanta to challenge winding up of Zambian business in court

A Lusaka court said a hearing had been provisionally set for June 20 to consider an application by Vedanta Resources to be represented by its own lawyers in proceedings to wind up its Konkola Copper Mines (KCM) business in Zambia, lawyers said. Vedanta Resources is challenging the appointment of a provisional liquidator without being given the chance to be heard through lawyers of its choice.

The oases that once interrupted the dusty slopes of the Atacama desert in northern Chile allowed humans and animals to survive for thousands of years in the world’s driest climate. That was before the mining started.

A new industrial revolution is brewing in Europe. It is one in which mining is expected to have a central role in redeveloping the continent’s main industries, while embracing an entirely new approach to resources extraction centred on people and green technologies.

6) Human rights defenders face reprisals. Here’s what OECD and National Contact Points can do to protect them.

A new Factsheet from OECD Watch and BHRRC sheds light on the risks to defenders who complain to OECD National Contact Points and makes recommendations on how to reform the system to keep them safe. 64% of reprisals occurred in the land-intensive extractives and agriculture sectors. 55% of victims were rural community members or indigenous groups.

A paper published in the journal Resources Policy states that bonus schemes for middle management employees in mining companies play a role in tailings dams failures.

BHP is facing the prospect of a seriously a beefed-up class action over its Samarco dam collapse after a court ruled two class actions against the miner should be combined.

In late January 2019, the collapse of two tailings dams at Vale’s Brumadinho iron ore mine in Brazil killed hundreds of workers and local residents in the state of Minas Gerais. Even more horrifying, the Brumadinho catastrophe was a tragedy foretold, with unheeded prior warnings from mine inspectors and Vale’s own workers. This disaster came on the heels of other tailings disasters, notably at the Mount Polley gold and copper mine in Canada and the BHP-Vale owned Samarco iron ore mine in Mariana, Brazil. 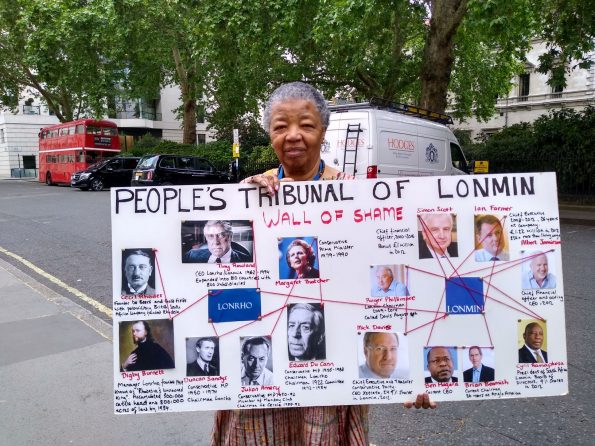 8) The last days of Lonmin

Report on the Court Meeting and Extraordinary General Meeting held to approve the takeover of Lonmin by Sibanye Stillwater, London, Tuesday 28 May 2019

Citing Lonmin’s inaction over demands made by South Africa’s Marikana community in the seven years since 34 striking mine workers were shot dead on 16th August 2012, activists from the campaign group Marikana Solidarity Collective conducted a People’s Tribunal, rather than attending the company’s shareholders’ meeting to ask questions of its executives. The campaigners and representatives of Marikana demand accountability from Lonmin before its proposed takeover by South African mining corporation Sibanye Stillwater.

The death of the 110-year old mining house Lonmin at a London shareholders meeting on May 28 occurred not through bankruptcy or nationalisation, as would have been logical at various points in time. It was the result of a takeover – generally understood as a rip-off of investors and workers – by an extremely jejune (7 year-old) South African corporation, Sibanye-Stillwater. The latter’s chief executive, Neil Froneman, is known for extreme aggression in both corporate takeovers and workplace cost-cutting, with by far the highest fatality rate in the mining industry.

Sibanye-Stillwater, which became the world’s biggest platinum producer after shareholders approved its merger with Lonmin last week, said that 3450 employees would lose jobs as it closed Driefontein 6 and 7 shafts and Beatrix 2 plant.

Report on the AGM of Antofagasta plc, held at Church House, Westminster, London SW1, on Wednesday 22 May 2019

10) Are we all at sea when it comes to ocean bed mining?

June 8th is commemorated by the United Nations  as the International Day of Oceans. Nonetheless, addressing the destructive impacts of  deep sea mining are still a long way down the agenda for many authorities which advocate it.

Five companies have agreed to collaborate with ex-workers and their dependants in settling claims for damages resulting from their exposure to silicosis and their suffering from tuberculosis. Implementation of the scheme is still to be approved by the Gauteng High Court. Other companies have so far opted not engage in the process.

We received with repudiation the numerous cases of threats and stigmatization that have occurred in recent months, and particularly the pamphlets circulated on May 11 against our workers, who are members of the Sintraminergética, Sintradem, CGT and Sintracarbón unions, as well as against social leaders of the regions of Cesar and La Guajira. We believe that the defense work carried out by these leaders is fundamental within the framework of the democratic exercise, and we express our rejection to those who consider that this exercise is questioned by the companies here signatories.

Can a uranium mine be rehabilitated to the environmental standards of a national park and World Heritage site? That’s the challenge faced by the controversial Ranger uranium mine (owned by Rio Tinto subsidiary ERA) inside Kakadu National Park. But a new research report found the document guiding its rehabilitation is deficient, and urgent changes are needed for the heavily impacted mine site to be cleaned up well.

Shares in London-listed, Ecuador-focused SolGold took a hit following media reports of a potential referendum on mining in Imbabura, the province in which its flagship Cascabel copper-gold project is located. The Cascabel copper-gold project has piqued the interest of major miners, including BHP. The world’s largest mining company last year acquired a 6.1% stake in SolGold, increasing its exposure to copper.

Indigenous Nuclear Genocide:  The start of the nuclear fuel chain is uranium mining, the weight of which comes down disproportionately on indigenous people, the poor and/or people of colour.

17) Towards mandatory human rights due diligence in the UK: Developments and opportunities

Just prior to taking over the European Union presidency, the new Finnish government announced plans to make it compulsory for companies to conduct human rights checks. A year ago, this would have seemed out of the ordinary. But growing recognition of the human cost of weak regulations on business, coupled with an erosion of public trust in markets, has led to momentum around initiatives to ensure companies halt abuse in their supply chains, writes Business & Human Rights Resource Centre Executive Director Phil Bloomer.