On 22nd June, 10-year-old Ahmad Setiawan died after drowning in a disused water-filled coal pit near Samarinda, East Kalimantan’s capital. His death was the third of its kind in 2019, and the 35th since 2011; children and young people have fallen into these abandoned mine pits while walking or have drowned while swimming in them.

One of the speakers at the forum was MP Richard Graham, the Prime Minister’s Trade Envoy to Indonesia. The Indonesian government offered investors 83 projects worth US$40 billion under public-private partnership, with 30 projects offered for private investment, worth $US50 billion – many of these projects are opaque because they include fossil fuel projects, such as funding  Central Java Coal Power plant – and the development of four airports.

The forum was hailed a success by Indonesian Planning Development Minister Bambang Brodjonegoro due to increased interest ahead of Brexit, but these risky investments do not only go against the British government’s recent climate emergency announcement, but its commitment to those in the Global South most affected by climate breakdown, of which mining projects have played a large part. Kalimantan has experienced repeated flooding and landslides in recent months, and, as the UK government’s own South East Asia’s Low Carbon Energy Programme points out, “SE Asia remains one of the most vulnerable regions to climate change”. 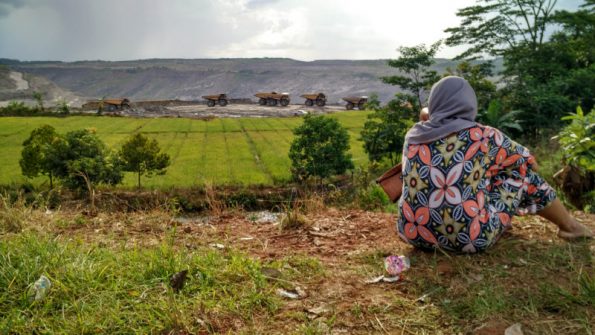 Extracting us: the effects of coal investment

On 11 July, an exhibition called Extracting Us will launch in Brighton, UK. It will document the children who have died in the abandoned coal pits, while bringing a wider context of the deadly legacy (1) of British, Indonesian and other mining companies in East Kalimantan, into sharp focus.

Extracting Us. Looking Differently: Feminism, Politics and Coal Extraction, ONCA gallery, 14 St George’s Place, Brighton, BN1 4GB. 11-21 July. You are warmly invited to attend the free exhibition and associated events in the gallery. On 12 July, there will be a a reading group between 3-5pm, discussing the links between coal extraction, Indonesian politics, feminism and climate breakdown, followed by the exhibition launch event between 6-8pm. On 17 July, there will be a screening of the film ‘Sexy Killers’ (2) and talk from 6.30-9pm, and on 19 July there will be a postcard writing workshop for young people between 2-4pm.

The exhibition is a collaboration between WEGO/ITN, and supported by: University of Brighton Centre of Excellence for Research in Spatial, Environmental and Cultural Politics; University of Passau, JATAM, TKPT, and London Mining Network.

(1) Indonesia is the fifth largest coal producer globally, exporting 80 percent of its production to feed the hungry economies of China, India, Japan and South Korea (that in turn feed other hungry economies). In areas of coal extraction, human and environmental health is threatened by current and past extraction – mining companies have often cleared out rather than cleared up their mess, leading to the avoidable deaths of children such as Ahmad, and in many cases, leading to the death and destruction of local ecosystems and livelihoods. But these threats are not felt evenly and the impacts on women, children, livelihoods, rivers, forests, rice fields, and people’s homes, are greatest.

(2) The story of coal in Indonesia is about a web of relations that exceed local areas of coal extraction and national borders. Indonesian activists call coal a ‘sexy killer’ because, far away from the sites of extraction, coal takes the form of energy, seducing consumers, businesses and politicians. The hunger for energy from coal is justified in the name of equal access and progress for all, and yet it is killing the people and the environment from where it originates.