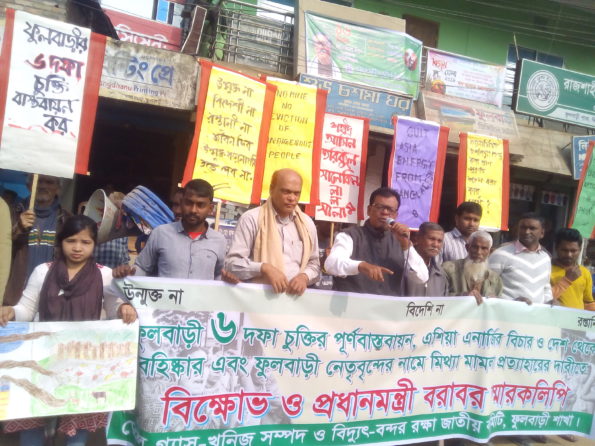 GCM Resources issued this statement late yesterday postponing Wednesday’s AGM indefinitely due to the risk of protests threatening the security of the venue:

“The decision to seek to adjourn the AGM follows consultation with the venue over access and security issues, which has resulted in the venue being withdrawn as the location for the AGM.”1

Loud protests had been organised by Phulbari Solidarity Group (1) alongside a wide coalition of organisations (2) at the AGM of the AIM listed British mining company GCM Resources Plc for the 10th consecutive year. Protesters planned to demand that GCM is de-listed from the London Stock Exchange as it has no viable asset to its name, and has not held a license for coal exploration or mining in Bangladesh since 2006. Inside the AGM, dissident shareholders would again dominate the meeting, accusing the company of misleading shareholders and the London Stock Exchange. Last year activists had glued themselves to the entrance of the AGM preventing some shareholders from entering.2 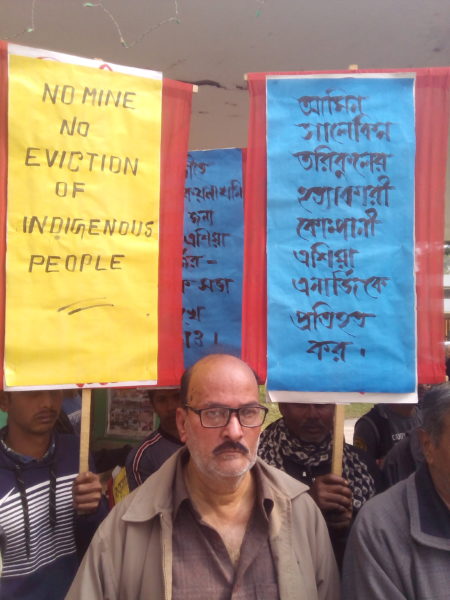 Meanwhile in Bangladesh, communities from Phulbari, Boropukuria and Dinajpur, many of whom are threatened with displacement by the planned mine, today demonstrated outside of the UNO (Phulbari District Office) and blocked the Nimtoli roundabout demanding that the Bangladesh government categorically end speculation on whether GCM can obtain a license, remove the GCM Resources office from Phulbari, and take legal action against the company for fraud and harassment of Phulbari residents(3). They maintain that GCM is responsible for the murder of three young boys and 200 injured in a 2006 demonstration. They have also handed a memo to Prime Minister Sheikh Hasina (who is also Bangladesh’s Minister for Energy and Mineral Resources) via the UNO, asking her to take legal action against GCM immediately.

“People’s resistance against GCM is still strong despite an environment of fear and surveillance. GCM’s fraud and illegal business must be stopped immediately by de-listing it from the London Stock Exchange to stop its continuing manipulation and corrupt attempts at coal mining along with Chinese companies, its harassment of community leaders, and preparations for violent crimes against people and environment in the form of open cast coal mining and displacement.”

“GCM’s postponement of their AGM shows that they are running scared from activists and academics who would expose the fraudulent nature of their London listing and trading on the LSE. People in Phulbari have lived under the threat of displacement, and with the trauma of the Phulbari killings for more than 13 years. Yet the London Stock Exchange has continued to list and generate capital for this company despite its total lack of any viable mining asset in Bangladesh. We are calling on the Bangladeshi government to categorically end the speculation, remove GCM’s office from Phulbari, launch legal action against them, and pressure the London Stock Exchange to finally de-list this criminal and fraudulent company. It is time to end the suffering for the residents of Phulbari.”

GCM Resources (then ‘Asia Energy’) listed on the Alternative Investment Market (AIM) of the London Stock Exchange in 2004, following the granting of a two year permit (license) from the Bangladesh Energy Department’s Bureau of Mineral Resource Development on 27 January 2004 for exploration and surveying of a 572 million tonne open cast coal mine at Phulbari in Dinajpur, Northwest Bangladesh. A Scheme of Development was submitted to the Government of Bangladesh in 2005 but has never received approval. The permit expired on 27 January 2006 and has not been renewed, yet the company has continued to sell shares and raise capital in London based on claims that a contract will be forthcoming. GCM Resources has no other assets or projects in its portfolio.3

On 26 August 2006 three boys were shot dead, and more than two hundred injured by paramilitary forces in a peaceful demonstration of 80,000 people against the mine.(4) Annual ‘Phulbari Day’ rallies have been held every year in the community and across Bangladesh, commemorating the deaths and protesting the company’s continued plans.4Recently, GCM’s CEO Gary Lye has filed multiple cases against 26 community organisers in Phulbari and Dinajpur claiming he has felt ‘harassed’ when he visited the area in an attempt to continue coal mining plans in 2014.

In August 2019 the Deputy State Minister for Power, Energy and Mineral Resources, Nasrul Hamid, made this statement to the daily Prothom Alo newspaper:

“Even in the absence of an agreement, GCM or Asia Energy is trading shares in London by providing information that coal would be extracted from Phulbari, which is false. The government has taken this into notice. The government is proceeding to take legal action against them .”

He stated that the Prime Minister Sheikh Hasina’s clear instructions are that the government has no plans to extract coal from Phulbari, and the future extraction of coal would only be considered if any advanced and environmental mining or coal burning technology emerged.5

According to GCM’s 2019 annual report and its Regulatory New Service submissions to the London Stock Exchange, the company signed an MOU with Power Construction Corporation of China (PowerChina) in November 2018 to develop a 4,000MW power plant at Phulbari as part of the One Belt, One Road Initiative of the People’s Republic of China. In January 2019, the Power entered into a Joint Venture Agreement with the GCM for the first stage of development, leading to a hike in its share price, despite the lack of government approvals for the project.6

We will send a further press release when a new date for the GCM AGM is announced.

Contact: Miriam Rose (00 44 7765 501687 miriam.rose@outlook.com ) to organise statements or interviews with any of the host organisations or case studies.

Case studies in Bangladesh are available.

Facts about Phulbari coal project at a glance: https://www.banktrack.org/download/the_phulbari_coal_project/iap_factsheet_footnotes_the_final_0.pdf

4See a report on the 2019 Phulbari day protests at http://www.newagebd.net/article/82675/agreement-execution-demanded-as-phulbari-day-observed?fbclid=IwAR2Kh_8fUnvCgaRXQGCtmHvmUAmYFN6iGWRCwb4tr2vFpF1H2tR19TCnOWE
5 https://www.voxmarkets.co.uk/articles/gcm-resources-signs-agreement-to-develop-its-phulbari-coal-mine-0dd27e3/