Events around the world are being organised to mark first anniversary of Brumadinho’s catastrophic mining disaster, in the context of a rising culture of corporate impunity in Brazil

Vigils and marches are being held across Brazil and beyond to mark the first anniversary of the disaster. A coalition of organisations including London Mining Network, Amnesty International UK, Brazilians for Democracy UK, War on Want and Global Justice Now will be holding a remembrance vigil, reading out the names of those who died, holding a minute’s silence, and sharing testimonies and the demands of those affected by the dam collapse. 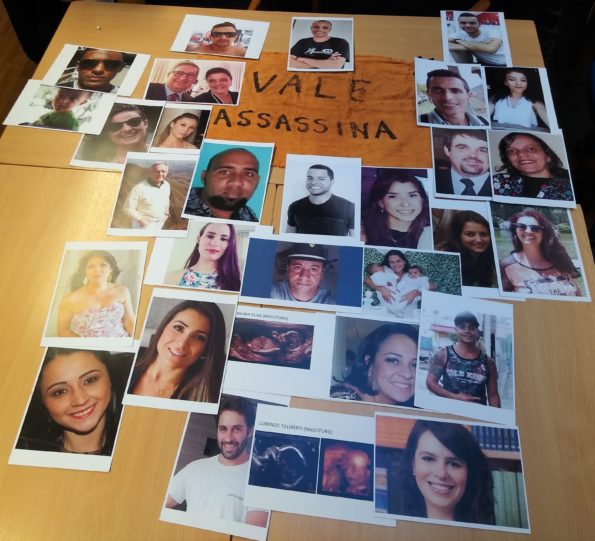 Brazilian mining giant Vale owns the Córrego do Feijão iron ore mine and dam in Brumadinho (2). It is just 75 miles from the Fundão iron ore mine and dam, also in the state of Minas Gerais, which collapsed in November 2015. Samarco, a mining company jointly owned by Vale and British-Australian mining company BHP, owned this dam. Twenty people died in what was Brazil’s worst environmental tragedy to date.

In the aftermath of Brumadinho, some major mining industry investors in the UK, such as the Church of England pensions board, disinvested from Vale (3) and began developing an Investor Mining and Tailings Safety Initiative to record data on tailings dams from around the world, although this has limitations due to its reliance on self-reporting. However, the International Council on Mining and Metals (ICMM) are attempting to water down standards that this initiative is attempting to introduce (4).

Brumadinho resident and member of Movement of Water and Mountains, Marcela Rodrigues, said: “On 25 January 2019 I lost my father and my friends. Many family members worked and work for mining companies. We have tried to make an inventory of our collective losses but nothing can measure our feelings and our suffering. Everywhere I go I carry with me 272 pictures of people who died at Brumadinho and their stories and suffering. 272 people represents one percent of the population, so everyone knows someone who was killed in the dam collapse. I try to transform my suffering into a fight. Some communities do not even have access to water and are not recognised by Vale as affected. Our agriculture is also suffering. I see that the collapse of the dam is only a part of the damage mining is causing to our communities.”

For further information, photographs or further quotes, get in touch.

(1) There are an average of three reported dam collapses a year worldwide, but the true figure is likely to be far higher. Read London Mining Network’s Tailings Dams: an Explainer for an introduction to the issues.

(2) Vale employees told the Guardian in July 2018 that they warned the company that the dam was unstable and were ignored. Many of those killed were Vale workers.

(3) Vale isn’t listed on the London Stock Exchange, but it does have links with the city with a number or large former and current UK investors. In the aftermath of Brumadinho, some major mining industry investors in the UK, such as the Church of England pensions board, disinvested from Vale and began developing an Investor Mining and Tailings Safety Initiative on tailings dams to record data from around the world, although this has limitations due to its reliance on self-reporting.

(4) The International Council on Mining and Metals (ICMM) has formed an ‘independent’ committee to set global standards for tailings dams. Its members include Glencore, BHP and other large mining companies, indicating a conflict of interest.

It has taken this second disaster for investors and the ICMM to take action, and many British shareholders that have disinvested from Vale still invest in BHP.