‘It is not drought, it is looting’: the Chilean community taking on Anglo American

Chilean activist Javiera Martinez writes about residents of the town of El Melón, who are occupying a well to protest a British mining company’s diversion of essential drinking water 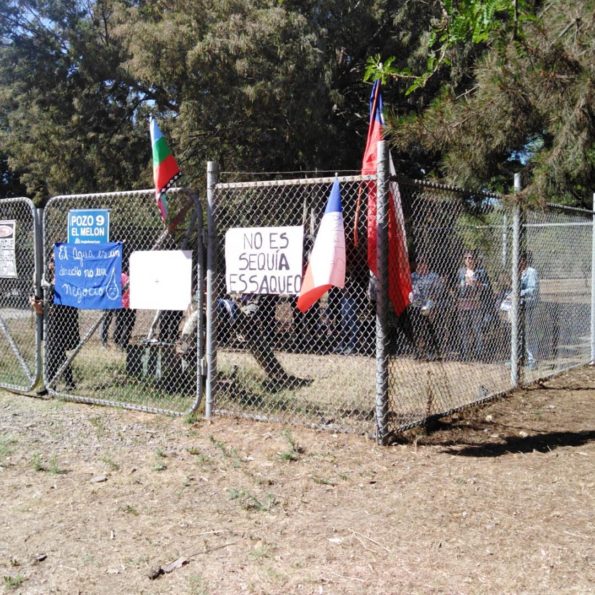 ‘It is not drought, it is looting’ is the slogan that movements in Chile are using in the fight for the defence of their water and land. The population is suffering from a decade of severe drought, seriously affecting the regions from the north to the centre of the country. The community of El Melón, near the capital, Santiago, is one of the regions affected by Anglo American, a British mining giant.

When Chile’s social movement began on 18th October 2019, the town of El Melón, in Quillota province, became a flashpoint for the struggle against the abuses of the neoliberal system that dominates the lives of the country’s citizens. The community decided to occupy one of Anglo American’s wells that lies within their land, well number 9, one of the 16 wells owned by the company to provide water for its El Soldado copper mine. The decision was made because of the water shortages affecting the town’s 11,000 residents since April 2019. Urgent action was needed to return the water to the people.

On 7th November 2019, the community, as part of ‘Organized Civil Society of El Melón’ (SCOEM), together with the support of organizations such as the National Movement in Defence of Natural Commons (MODATIMA), managed to occupy the well. A day after the occupation began, the mining company bypassed the pipe that was providing the residents with some water, the Rural Potable Water (APR) pipe, which meant that for over three days the community had access to only 15 litres of water per second.

‘We occupied the well to solve our urgent problem’, says Patricio Duran, trade union leader of El Melón. ‘Almost no family in El Melón has water. Something unique to our town is that the houses have only been partially built: for example, bathrooms have not been built because people know that they will never shower there, they will only shower with buckets because there is no water. This explosion was going to happen because people are tired, going all day without seeing a drop of water through the pipes until the work on the mine is finished for the day, between 1 and 3am. But people have to get up to do their things; we can’t keep living like this.’

During the action, the community delivered a 24-point petition to Anglo American. The demands highlighted how the community has been affected by drought, the pollution of its rivers and soils and the possible collapse of a tailings (liquid mining waste) dam. The petition seeks to return dignity to families for the violations they have suffered at the hands of the company.

After 80 days of resistance, police forces evicted the community from well 9 on 24th January. However, the community decided to continue occupying the well, according to Patricio Durán, because there was no solution forthcoming. Some community leaders have reported that the company is also capturing water from the Cordillera mountain range, extracting groundwater and disrupting the natural flow of rivers, which means the company is consuming water not only from the well, but also from estuaries and rivers.

‘The estuaries dried up seven or eight years ago in El Melón because Anglo American extracted water from the ground and from wells and bought almost all the water rights, removing the right to water for our people’, says Patricio Duran. ‘They do not understand the damage that they are causing – we have wells in the same town, metres from our homes. What they do is pump the water from below, further down. It has not been enough to steal the water from the mountain range, they also have wells in our town, illegal wells.’

Some of the demands the community is making of the company include: definitively and completely withdrawing from its mining operation to reduce its water use within the communal territory, to allocate 19 litres per second of fresh water projected from the mine’s hydraulic barrier (a barrier that isolates contaminants present in groundwater from drinking water) for the people of El Melón, to generate a decontamination plan, and to repair the environmental damages generated by its activities.

‘In our town, we have many environmental disasters because of Anglo American, for example, they made a rubbish dump in a forest in which we had indigeneous trees such as the northern acorn species, for thousands of years. It was a protected area and they killed everything, there was no tree left’, Patricio Duran explains.

‘The price that the company had to pay for this was to plant indigeneous trees in another location. The problem is that nobody is responsible for anything and after one or two years the trees died because nobody took care of them. The desert is crossing the hill, it is stalking us and here we have nothing, we have nothing left, everything is dying.’

Despite their first eviction on 24th January, the El Melón community continued to occupy the well until 11th February, when they were again evicted by police forces. Police arrested eight members of the community, including two minors. The situation is complex because the eviction was requested by the Quillota municipality and Anglo American because, according to community members, the mayor of the municipality supports the company’s actions in the territory. 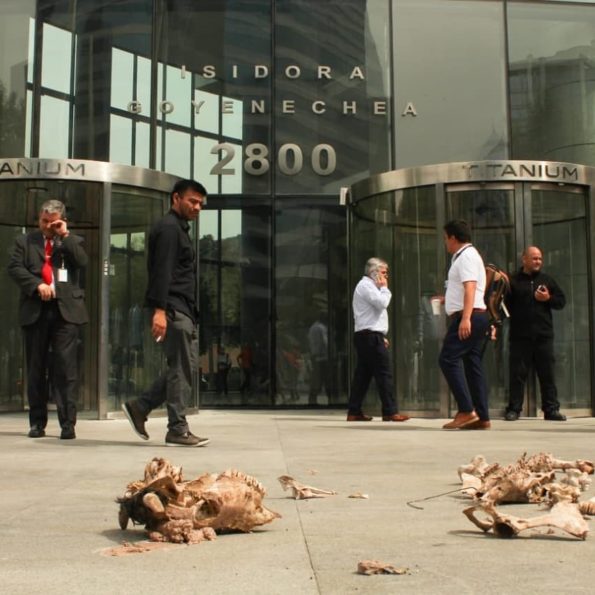 The ‘El Torito’ tailings (liquid mining waste) dam next to the El Soldado copper mine was constructed in 1992. Anglo American became the owner of the mine in 2002. The tailings dam for this mine is around 92 metres deep and almost three kilometres wide, containing a volume of about 180 million metric tons of toxic waste. The community knows that this situation will get worse, because an extension project for the tailings dam has been approved. This project aims to increase the height of the tailings dam by 1.4 metres each year from the start date of the project until 2027.

The National Center for the Environment of Chile assessed the health risks to the local population as a result of the mine’s contamination of the Estero El Cobre river, in a report prepared in 2012. It found that the Estero El Cobre, which is in constant contact with the El Melón community, was contaminated with high concentrations of metals, anions, sediments, dust, metallic elements from soil and food particles. In 2019 alone the Regional Ministry of Health received over 80 cases of gastroenteritis, due to drinking contaminated water.

The situation in which families live is complex due to the presence of the tailings dam, not only because of the daily exposure to the toxic elements they face, but also because of a possible collapse of the dam. After an earthquake in 1985, which had its epicentre in La Ligua, the tailings collapsed and about 200 people in the community died. A report by the Chilean National Geology and Mining Service (SERNAGEOMIN) back in 2013 stated that the tailings dam infrastructure had flaws in its construction and operations. However, the mining company only had to pay a fine of 90 UTM (Monthly Tax Units – indicating how much tax should be paid), equivalant to around £4,000, because it violated a decree regarding the stipulation of the design, construction, operation and disposal of tailings deposits.

El Melón will continue to fight against Anglo American’s multiple violations of human rights by occupying well 9 in some way until the company responds to their 24 demands. The community will defend its right to water for as long as this right is not enshrined in the Chilean constitution.