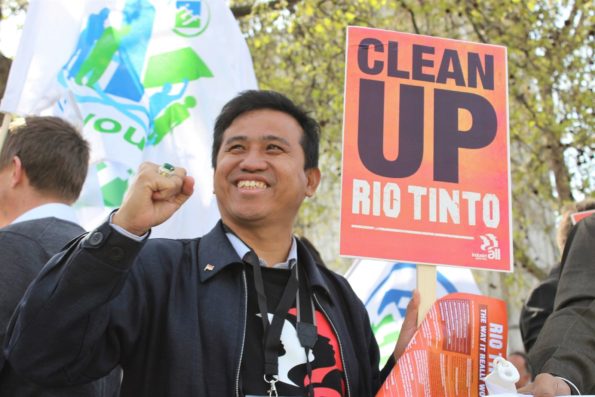 British-Australian mining giant Rio Tinto is gaining a reputation for not cleaning up its toxic mining mess – in Papua New Guinea, West Papua and Madagascar, to name a few. Most recently, the government of New Zealand threatened the company with legal action for failing to deal with toxic waste from an aluminium plant during recent floods. Read our new report on Rio Tinto and BHP’s policy of fleeing contamination caused by mining and other messes.

Rio Tinto has mining operations in 36 countries around the world. We had planned to welcome visitors from affected communities in Madagascar and Bougainville (a Pacific island that recently voted for independence from Papua New Guinea) to challenge the mining giant around its annual general meeting (AGM) in London on Wednesday 8th April. Obviously this week has been cancelled because of Covid-19, but we will still be bringing the demands of the communities and their questions to the AGM.

Every year we attend this meeting as dissident shareholders, to ask uncomfortable questions of the company and to remind them of the communities around the world experiencing human rights violations and environmental degradation as a result of mining operations. But this year Rio Tinto has decided to hold its meeting behind closed doors. This is undemocratic. There will be a conference call for shareholders after the AGM, but questions will have to be submitted to the company beforehand or callers can queue online to ask their question live, if there is enough time in the 90-minute call. The global pandemic and the lack of transparency aren’t going to stop us though.

There are many questions to be asked of the company: in February, it announced record dividends for investors, but the key stakeholders – the communities affected – haven’t seen the results of this.

In March, the company agreed to pay former chief executive Sam Walsh US$4.5m in deferred bonus payments despite continuing bribery investigations. The FT reported that ‘the decision to pay the bonus before investigations by the UK’s Serious Fraud Office and the Australian Federal Police have been concluded has been criticised by corporate governance experts’.

Meanwhile, the company is whitewashing its toxic legacy and the devastation that it is currently wreaking on communities and local ecosystems. The whitewash can be found in its pledge of AUS$25 million to communities around the world to help them with preparing for Covid-19. But this glosses over the fact that mining-affected communities often suffer from water contamination and a lack of water due to mining operations.

The company is also greenwashing* its human rights violations with its new-found passion for ‘green metals’ (such as copper, lithium, cobalt) mining is simply adding another type of destructive mining alongside fossil fuel mining. The company states that it ‘aim[s] to be part of the solution to help address the climate change challenge’, but its climate change strategy is only concerned with carbon emissions. There can be no climate justice as long as the company continues its racist, neo-colonial policies of carrying out ecologically harmful mining projects in communities in the Global South and beyond.

The mining industry is responsible for a quarter of the world’s carbon emissions and as Rio Tinto is one of Britain’s top two mining giants (BHP is the other), the company must be held to account. It is listed on the London and Australia stock exchange.  London is a global hub of mining finance and is where many of the world’s largest mining companies HQs are based, along with major individual and institutional investors.

*greenwashing – companies hiding their human rights and environmental abuses behind attempts to gloss their image through purported action on climate change. This action usually only extends to reducing carbon emissions)

Take part in our online week of action to put pressure on Rio Tinto!