BHP is an Anglo-Australian mining and petroleum company headquartered in Melbourne, Australia, and listed on the London Stock Exchange with a major management office in London. It is the world’s largest mining company with a value of almost $130 billion in 2020. It has 33 operations in 15 different countries around the world as shown in the map below, including coal, copper, iron ore, nickel, petroleum and potash. While the company is eager to present all of these as success stories of progress and great contributions to ‘development’, they are in fact stories of environmental degradation, water pollution, climate change, destroyed livelihoods and dangerous risks to people’s health and even lives. 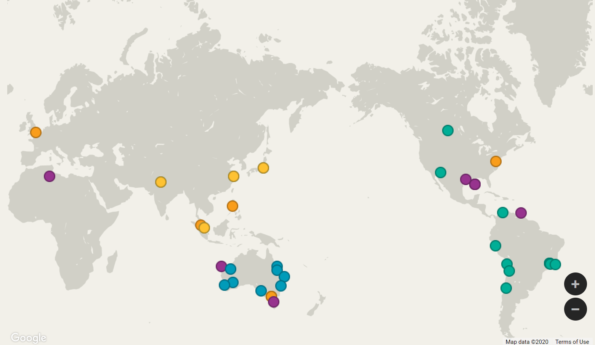 Across the world local communities have been opposing BHP’s operations for years. What follows is a brief summary of the main struggles that LMN is currently involved with. For a more extensive list of controversies and issues surrounding BHP operations, as well as BHP’s dark past, we invite you to look at our alternative timeline of the company’s history and our 2020 report on BHP. Our 2020 report ‘Cut and Run’ gives an in-depth account of BHP’s legacy issues in Indonesia and Papua New Guinea, where the company still refuses to take responsibility for the destructive impacts of the Indomet coal mine and Ok Tedi copper and gold mine respectively.

In November 2015, the collapse of the Fundão tailings dam in Minas Gerais, Brazil, led to 45 million cubic metres of mining waste spilling into the Rio Doce and its tributaries. Its collapse resulted in 20 people being killed, the destruction of the settlements of Bento Rodrigues, Paracatu de Baixo and Gesteira, and the degradation of 637 kilometres of the river basin with severe knock-on effects. The dam was owned by a joint venture of BHP and Vale, who failed to respond adequately in terms of cleaning up the river and supporting those affected by the disaster and compensating them. LMN’s 2017 report includes a detailed assessment of the impacts of the dam collapse.

Five years after the disaster, less than 15% of planned new dwellings in the settlements that were destroyed are under construction and none have been completed. BHP refuses to take responsibility for this disgraceful delay, while the delay in compensation continues to increase people’s vulnerability. Moreover, the company claims that the river has recovered from the disaster, without scientific evidence to support this claim and in contrast to local reports. Read the LMN statement for the Samarco disaster’s 5th anniversary here.

The Cerrejón coal mine is jointly owned by Anglo American, BHP and Glencore. The giant open-pit mine is located in La Guajira, northern Colombia, where it has displaced and continues to displace indigenous Wayuu and African descent communities. Local communities have often been relocated and face multiple issues as a result, including loss of their livelihood. Meanwhile many of the alternative economic projects set up with Cerrejón funding have failed, leaving ​people without adequate incomes. The mining operations have also severely damaged the natural environment such that local people fear the land will never recover even after mining stops. This includes destruction of local watercourses which have exacerbated conflict over water as local communities report not having enough water. Additionally, pollution and dust from the coal mine has caused the contamination of water supplies and the air.

In our 2020 briefing we elaborate on two main issues regarding BHP’s responsibility for Cerrejón. The first is BHP’s failure to comply with legal orders by the Colombian Constitutional Court and other courts in the country around environmental damage and violation of rights. The second is regarding BHP’s strategy in light of the pressure to phase out coal. Instead of a closure plan with a just transition, the strategy aims to reduce the operational costs at the expense of the workers and to facilitate expansion of the mine by diverting water sources.

BHP operates two mines in Chile’s Atacama Desert, which have both severely depleted local water resources at a time when Chile is experiencing a megadrought. The Escondida mine (majority owned by BHP) is the world’s largest copper mine and wastes over three times as much water as any other BHP operation. Meanwhile, the Cerro Colorado mine has been extracting almost three times as much water as it was authorised to. This has resulted in damage to lakes and wetlands that cannot easily be reversed, while many people whose livelihoods depend on the land have been forced to move to urban areas. BHP is facing multiple lawsuits for over-extraction of water in Chile.

BHP is the minority owner (45%, along with Rio Tinto 55%) of Resolution Copper, which is proposing a large copper mine near Superior, Arizona. The proposed mine would destroy the religious and sacred place known as Oak Flat, including a public campground and potentially up to 6,000 hectares of public land. The project includes a controversial and technically problematic deep underground block cave mine 2,134 meters below the surface of Oak Flat. This would create a crater roughly 3,200 meters wide and 300 meters deep due to subsidence of the land. The project has already received much opposition due to its environmental impacts and how it will affect the indigenous peoples to whom Oak Flat is sacred. BHP claims they have the legal right to build the mine in the manner they intend to, while denying that the area is culturally significant to some and refusing to demonstrate the infeasibility of alternate mining methods.

Alternative timeline – a timeline of controversies in BHP’s history

Fine Words, Foul Play – 2020 summary report of current and past issues regarding BHP

The River Is Dead – 2017 report about the Samarco disaster