More people own a phone worldwide than have access to a toilet. (Of the world’s seven billion people, six billion have mobile phones, according to the UN).

We deliver educational workshops in schools and in the community based on a board game depicting the lifecycle of a smart phone. Focusing on phones is a tangible way to transform the dark, often abstract, world of extractivism into a relatable problem with potential solutions.

Made in 2017 by LMN’s advisory committee member, Kerima Mohideen, the PhoneCycle game is not just a game but a collaborative learning workshop. The aim of it is to raise awareness of and stimulate conversation about the social and environmental impacts involved in producing, consuming and disposing of phones and to discuss what we can do about it.

The Trivial Pursuit-style board game can be played by six to eight people. Teams of one or two are responsible for the four different parts of the lifecycle of a phone – extraction, production, consumption and disposal. The players use one or two dice to go around the board, picking up cards along the way about the issues raised and reading them out to each other. The cards include casestudies, such as women miners who are exposed to dust, or artisanal (sometimes called ‘illegal’) cobalt miners in the Democratic Republic of Congo that risk their lives due to a lack of safety measures, while in Malaysia, workers sleep eight to a room in a hostel at an electronics company.

Using a map in the middle of the board, players identify different parts of the world where the processes involved in making a phone take place.

The game is more aimed at discussion rather than competition, but for the competitive types out there, those first around the board, or those with the most ‘green reward cards’, where players choose whether to make a more ‘ethical’ choice or not, can be the winners. 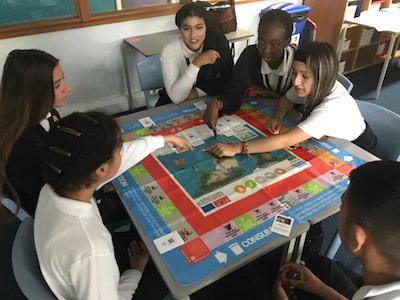 The lifecycle of a phone:

The process of removing minerals and fossil fuels from the ground to be used in a phone, such as cobalt and gold. Mining for minerals affects communities predominately in the Global South.

Making a phone using the different parts, in assembly lines in factories, such as in China and Malaysia. Workers rights are often scarce or non-existent.

Buying and using a phone. This is where the most positive aspects of the lifecycle are felt, as phones can save lives and connect people around the world.

The commercial and cultural encouragement to upgrade phones adds to the frequency of disposal. Parts are rarely recycled.

The game had some trips out in 2017 and at the beginning of 2018, the project expanded. In January, Kerima and comms worker Lydia went to Birmingham and played it with youth leaders working with Catholic organisation, the Columbans. In February, at the Lush Summit, organised by Lush cosmetics for its employees and representatives of organisations which it has helped fund, including LMN, Kerima and Lydia were interviewed for the Summit’s television channel (00:00 minutes in), thus bringing the game to a larger audience.

The team took the game back to Birmingham to inner city and faith schools, followed by schools in South and East London, a church and environment conference in Croydon, a Woodfolk summer camp in Suffolk and, at the end of the year, to Kingston University in Surrey.

So far in 2019, the game has had another outing at Kingston University and to an Anarchist group in London. Contacts are being made with different education networks and individuals to increase the reach of the game.

Let us know if you would like us to run a workshop in your venue. We can bring five sets of the game and a facilitator or two to run the workshop for groups of up to 30. Workshops are free, although if your group is in a position to contribute to travel or other costs, that would be much appreciated, because we operate these on a shoestring! For more information and to book, contact education@londonminingnetwork.org.

We are looking for funding to run more workshops, and to train volunteers and educators to run these workshops, making the project more sustainable. Please let us know if you would like to discuss this.

The workshop raises questions such as:

What about the environmental and social injustices that relentless production causes?

What ideas do people have for solving some of these problems?

Who are the people involved in making our phones and where do they live?

Does the lifecycle of a phone do more harm than good?

Can we affect how much harm versus good a phone causes?

The game is designed for KS4 and KS5 students, but is equally suitable for university students, community groups and organisations. It involves quite complex casestudies, and, while the issues can be simplified, it is not yet suitable for children under the age of 12. We are beginning to work on a game that caters for under 12s and for people with limited language comprehension.

“The board game was interesting as it was filled with facts.”

“I got to learn more new things about mobile phones and how they help and cause problems for people around the world.”

“[I liked] the board game and the debate about the phone lifecycle.”

“Maybe each group could represent a different company and we have to make decisions on sustainable mobile production. Judges decide who wins.”

As well as continuing with the game in its current form, we hope to start work on a simpler and more active version of the game for younger children and people with lower language comprehension, educational needs, etc.

We are also considering a new project, based on roleplay, where young people become different actors addressing a proposed mining project. For example, mining company representatives, community defenders, politicians, the river, and so on.

We are also excited to start collaborating with other groups, including Pax Christi, the Peace Education Network, and others. Get in touch if you would like to work with us.

See our other educational work, the School Witness project, for what else we got up to last year, and how we hope to develop that during 2019.