Human Rights Day: The costs behind a new smartphone 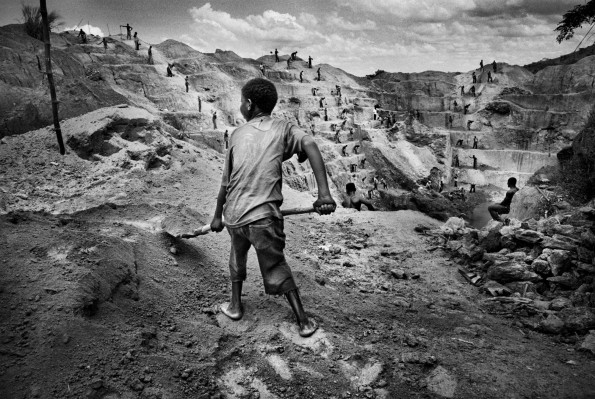 A child mines for gold in Watsa, Ituri province, Democratic Republic of Congo, DRC, in October 2004.

Hundreds of thousands buy smart phones for Christmas presents in Europe. But how many of them know that the gold and tantalum found in these gadgets are mined with forced labour and child labour in some countries, and that the generated revenues can support armed conflicts in countries like the Democratic Republic of Congo and Colombia? European NGOs in the Stop Mad Mining campaign launched a petition so that a strong EU regulation can tackle this issue.

“The conditions were inhuman. The armed groups saw themselves as outside the law — no one could control them.” Axel Mutia Mburano describes life in a mine in Congo, where he worked alongside about 15,000 others, digging for the mineral cassiterite and panning for gold in a nearby river.

Thousands of mines can be found in the Democratic Republic of Congo, which is very rich in natural resources, and artisanal mining provides livelihood for many people in the country. The mine, in which Axel worked, fell under the control of an armed militia in 2008, and the working conditions descended into what Mburano describes as “slavery.” The revenues from the mining and trade of cassiterite (one type of tin ore) and gold fuel violent conflicts, and poverty, rape, child labour and other human right abuses are often the consequences.

But where does all this money come from?

On 10 December – Human Rights Day – London Mining Network and our partners draw the attention to the fact, that eventually the European consumers also contribute to financing these conflicts indirectly. Smart phones, lamps, zippers, tooth pastes and many other consumer products contain minerals, which can be linked to violent conflicts. Most often these minerals are gold, tin, tantalum and tungsten, which can also derive from conflict zones of the DRC or Colombia.

But we can act on it.

The European Union is negotiating a regulation on conflict minerals, setting rules for the importing companies on responsible sourcing. The companies would be required to assess the implied risks of their procurement, and take measures towards buying minerals from conflict free sources.

The question is if the final EU regulation will be mandatory and if it will apply through the whole supply chain, thus leading to meaningful changes.

Hence London Mining Network launched a petition with its partners asking European governments to stand up for a strong EU regulation. Because no European consumer should become unknowingly a financial supporter of violent conflicts!

The European campaign “Stop-mad-mining” was launched in March 2015 in collaboration with 13 civil organisations. Its main aim is to promote sustainable and globally just production and consumption of raw materials with the support of the public, companies and politicians, and to reduce raw material consumption and phase out non-renewable energy use.