Back to tragedy: more news of the BHP Billiton/Vale tailings dam collapse in Brazil 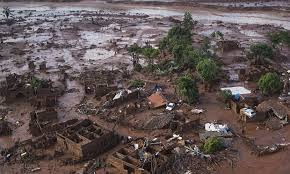 By Fabiana Alves, Greenpeace Brazil, translated by Paul Robson
In the month of June, we returned to the banks of the Rio Doce to update ourselves on the situation in the region and present to local people and institutions the research studies that will be carried out in the next six months about the fauna, flora and water of the region, and about the impact on the people affected.
We landed in Belo Horizonte (MG) and then proceeded to drive to Mariana to start meetings with those affected by the bursting of the Fundão dam, owned by Samarco, a company formed by Brazil’s Vale and Anglo-Australian BHP Billiton.
The city is still beautiful and welcoming but, when talking to people, the impact that the destruction of Bento Rodrigues sub-district had in Mariana is clear. Dependent on mineral production for people’s livelihoods, the city is being affected economically and adespair for a quick solution begins to bubble up.
Bento Rodrigues cannot be accessed without being accompanied by the civil defence group of Mariana, who warn us of the risk of collapse of the Germano dam – showing that little has been specifically resolved on site in terms of security. A second collapse would affect even more a river already taken over by mining waste.
More than 260 families are still without a defined place to rebuild their home. These people receive a minimum wage and a basic basket of goods from Samarco, which continues with a cheap and easy welfare strategy to resolve the situation since paying the minimum is easier than creating a structure that provides the conditions for workers to return to their original livelihoods and recover their physical losses. Some residents of Mariana put the blame on the affected populations for the economic situation, which fell apart with the freezing of Samarco’s activities, a clear reversal in perspective between the guilty and those directly affected.
In other municipalities along the Rio Doce, the fear continues of potential water contamination. In Governador Valadares (MG), where there is no other source of water abstraction than the Rio Doce, those who have the money buy mineral water, and no one consumes fish. The same is repeated in other cities, which also fear contamination of food irrigated with river water. Linhares, Espírito Santo, which suffers from drought and is not able to inaugurate the new water system from the Rio Doce, is draining the water of its famous lakes – now isolated so that they do not suffer contamination.
The Krenak know much about the ways in which Vale negotiates, as the company has a railway line passing through the middle of their demarcated indigenous land. Their village receives drinking water from Vale because it refuses to use water from the Rio Doce. The only existing water abstraction alternative is the Rio Eme, which is dry due to drought and deforestation. Drought worsens the situation of Krenak, who are small farmers and ranchers who depend on irrigation for cultivation. The size of the damage caused by Samarco, Vale and BHP are still immeasurable.
With respect to governments, the only existing common policy is the inter-federative agreement between the state government, federal government and Samarco, signed on March 2, that did not listen to the people and municipalities affected by the mud-spill, and left the solution totally in the hands of the company. The “judgment” as it is called, is being questioned by federal prosecutors and institutions, including Greenpeace, which issued a letter of rejection of the settlement.
We finished our journey in Vitória, Espírito Santo, where fishing at the mouth of the river is prohibited since February in response to the recommendation of the Chico Mendes Institute for Biodiversity (ICMBio). While the degree of contamination of the water is still under investigation there is no fishing. And even if fishing were allowed the population would not consume it, according to the fishermen.
Meanwhile, discussions like the Proposed Constitutional Amendment (PEC) 65 are raised in Congress in order to weaken environmental licensing for major projects with environmental and social impacts. It is also worth remembering the new Mining Code, which seeks to reduce bureaucracy and overrides conservation units, indigenous lands and Quilombo. All this is in the name of progress and development.
The studies selected through the public tender of the River of People, in partnership with Greenpeace, were well received by everyone in the region and arrive at a good time since each piece of research could provide a possibility for a solution for inhabitants and affected people. The Samarco dam burst is already one of the biggest disasters of the century, and should serve to remind leaders that an environmental impact will always also be a social and economic impact.
* Fabiana Alves is from the Climate and Energy Campaign of Greenpeace Brazil
See also:
BHP Billiton to take $1.3bn hit from Samarco dam disaster
Brazil state could ban dam design used at Samarco mine
Brazil: BHP unlikely to reopen Samarco this year amid criminal probe