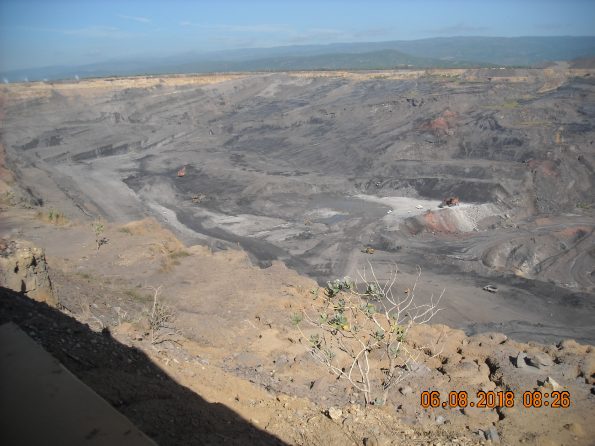 The Cerrejon coal mine

By Richard Solly, member of Colombia Solidarity Campaign and Co-ordinator of London Mining Network
In August I participated in a delegation to the province of La Guajira in Colombia,  organised by US-based Witness for Peace. We visited communities affected by the Cerrejon Coal mine, owned by London-listed mining multinationals Anglo American, BHP and Glencore.
I have visited the area many times, but this was the first time I visited communities affected by the railway which carries coal from the mine in the south of La Guajira to the coal export port at Puerto Bolivar, a hundred miles to the north east of the mine. The railway crosses the heart of Wayuu territory – the Wayuu being the most numerous of Colombia’s Indigenous Peoples.
At the village of La Gran Parada, home to 21 indigenous families, we were told that the long coal trains pass frequently and produce contamination all the time, because of coal dust which blows off the open coal trucks. Coal dust settles in the village and in the local jaguey, or water hole, causing health problems for both animals and people. Mine management tell us that they do their best to reduce fugitive coal dust by compressing the coal with water and surfactants, and they monitor air quality in order to be able to take action quickly should it be necessary. Nonetheless, the concern remains. 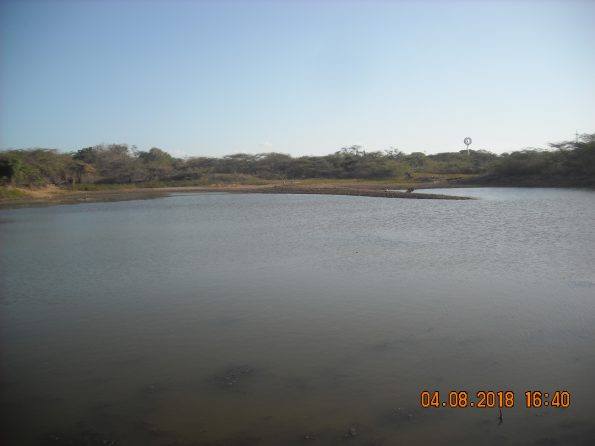 The jaguey at La Gran Parada

There is also, we were told, ‘sociocultural contamination’, because the people’s territory is divided by the tracks, and the tracks are guarded by soldiers. “We are no longer free to come and go,” we were told, “and at certain times of day we cannot go anywhere because of the military posts on the road which are there to protect the railway.”
The arrival of the military, they said, had created prostitution and drug addiction. This has created much conflict. “We never had this before,” they said. “Soldiers have raped girls. There are girls of 12 to 15 who are getting pregnant by soldiers. We have had to start working on sexual health. This did not happen before the militarisation.”
We were told that the military presence is causing division between the generations: “We used to listen to our parents and grandparents, but now young people don’t want to listen. Young people associate with the military, get shirts from the soldiers. Now young men want to join the army instead of raising animals and practising agriculture. Wayuu people can usually get out of military service but now lots of young people want to do it.” The militray presence undermines indigenous tradition in other ways, too: “The military is now appropriating our water sources so we cannot use them. According to our custom, when we go to bathe and swim at the jaguey, men and women bathe separately. Soldiers began to come and watch.” The soldiers’ voyeurism discourages people from maintaining their traditions.
People are concerned about the physical danger caused by the soldiers’ weaponry: “Soldiers clean their guns with children around and a gun had gone off while a soldier was surrounded by children. A young man from here was crossing the road to the community and soldiers demanded his identity card, which he did not have. They started shooting at him, very close to a house with children in it.”
Despite the fact that the Wayuu people have lived in the area since time immemorial, we were told, “The army treats us as suspect, even in our own houses, even though we belong here. This happens all along the railway and around the mine. Leaders of communities and of [indigenous women’s organisation] Fuerza de Mujeres Wayuu are subject to threats. The army itself participates in the threats. A commander recently told me to stop passing by, and I told him I live here, I belong here, and that the army is there to protect the integrity and lives of Colombian citizens, not the profits of foreign corporations. We have denounced the threats to mine officials as the government officials are servants of the mine.”
Mine management tell us that the soldiers are in the area to carry out their constitutional duty to protect citizens from illegal armed groups and criminal organisations as well as to patrol the national border and protect economic infrastructure. Human rights training is provided to military personnel and complaints about their behaviour can be taken up with the company’s complaints office. Well, local residents do indeed take matters to the company’s complaints office – but the complaints continue.
In the community of Charito we were told, “Many people have come from outside to work here in Wayuu territory. Communities along the railway line do not participate in employment. Our young people hunt iguanas and rabbits. The coal train passes close by, coal dust pollutes the air and settles on the land but our people get no work from the mine.” People spoke about the conflict that had occurred when the FARC guerrillas were in the area before the peace deal signed last year, and its continuing legacy: “There was a lot of conflict when FARC were here: the train was impacted. So the military came in saying we were all part of the FARC. The company and the army don’t respect us and we are worried we may be threatened or killed.”
At another small village, Paradero, we again heard about how the building of the railway line had limited people’s freedom of movement: “The community is small. My family is dispersed in different parts of the same territory. We are separated by the railway line. This affects us greatly. In the beginning, our animals could wander everywhere, but the train killed many animals. A man was nearly killed by it – he was left disfigured. Cerrejon has never compensated us or asked us for meetings about it. It’s an insult. In Wayuu culture, when there is a death, the family that is the cause has to give the victim family all their possessions. … Death caused by the train is not an accident but a murder and should be compensated as such.”
At Paradero we heard again of people’s fear of being attacked. People who criticise the mine sometimes get accused of being guerrilla sympathisers, and then they can be targeted by opposing armed groups.
Mine management tell us that they also are very concerned about threats against their critics and that they have publicly denounced such threats. They always take news of such threats to the relevant government bodies for them to investigate and take whatever action is necessary. The problem, of course, is that successive Colombian governments have established a woeful track record of complicity in appalling human rights abuses, and recent Colombian governments have made a point of favouring large-scale mining projects over small-scale farming. Not much is to be hoped for from the authorities.
Another issue raised by people in several communities was that of the noise from the railway. Noise at night wakes people up and disturbs their dreams, which are of huge importance in Wayuu culture. “The railway interferes with our dreams, which are a key part of our spiritual life, our spiritual growth. My mother is a dreamer but she can’t dream properly because the train passes every half hour and wakes her up and she can’t get back to her dream.” 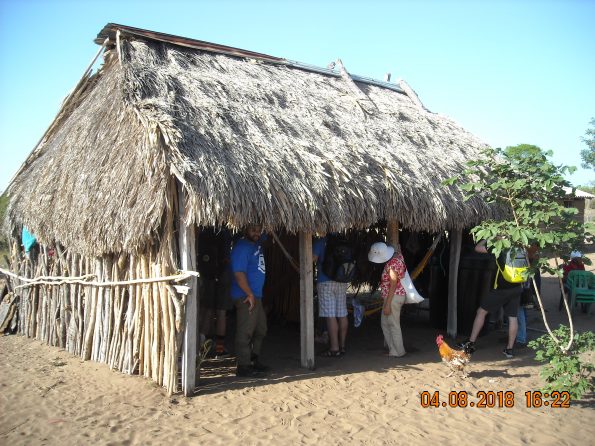 One person summed up what people in all the communities were telling us: “The mine has brought us suffering and poverty and done us irreparable damage.”
But we were also told, “Your visit gives us strength to continue with our struggle.”
That’s why we have to continue our solidarity until the communities affected by Cerrejon Coal get the justice that they deserve.
Remarks in this report have not been attributed to individuals in order to avoid people receiving further threats to their lives or the lives of their families.