In Phulbari and London, communities are angry because of GCM’s decision to postpone the AGM, which is becoming an instutitional habit. London-listed companies are required to hold AGMs within 15 months of each other, this means the company must hold another AGM by 28th March 2020 so that it’s not in breach of UK law.

Instead of protesting outside GCM Resources AGM tomorrow for what would have been the 11th consecutive year, campaigners will meet at University College London to discuss how to respond to GCM’s latest move. The last annual shareholders’ meeting which GCM held in December 2018 saw activists gluing themselves to the entrance of the building, preventing some shareholders from entering.2

On 30th March, Phulbari communities are planning to march on foot from Phulbari to Dinajpur under the banner of the National Committee of Bangladesh to protect oil, gas, mineral resources and power-port. The march is to demand that the Bangladeshi government take immediate legal action against the AIM-listed company. Banglad 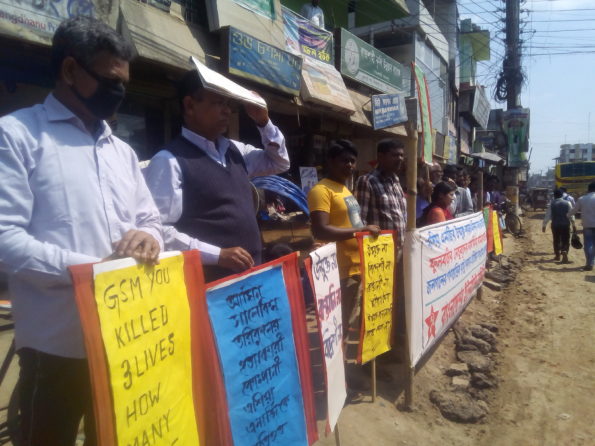 esh’s Deputy Energy Minister confirms that GCM has no valid license or asset in the country, and claims that the government will be taking legal action against them.

It is also to demand an end of speculation about whether GCM can obtain a license, to remove the company’s office from Phulbari, to ban coal mining and to take legal action against the company for fraud and harassment of Phulbari residents(4).

“People’s resistance against GCM is still strong despite an environment of fear and surveillance. GCM’s fraudulent and illegal business must be stopped immediately by delisting it from the London Stock Exchange to stop its continuing manipulation and corrupt attempts at coal mining along with Chinese companies, its harassment of community leaders, and preparations for violent crimes against people and environment in the form of open cast coal mining and displacement.

To organise statements or interviews with any of the host organisations or case studies, contact:

GCM Resources (then ‘Asia Energy’) listed on the Alternative Investment Market (AIM) of the London Stock Exchange in 2004, following the granting of a two year permit (license) from the Bangladesh Energy Department’s Bureau of Mineral Resource Development on 27 January 2004 for exploration and surveying of a 572 million tonne open cast coal mine at Phulbari in Dinajpur, Northwest Bangladesh. A Scheme of Development was submitted to the Government of Bangladesh in 2005 but has never received approval. The permit expired on 27 January 2006 and has not been renewed, yet the company has continued to sell shares and raise capital in London based on claims that a contract will be forthcoming. GCM Resources has no other assets or projects in its portfolio.3

Phulbari communities maintain that GCM is responsible for the murder of three young boys and 200 injured in a 2006 demonstration. In December 2019 they handed a memo to Prime Minister Sheikh Hasina (who is also Bangladesh’s Minister for Energy and Mineral Resources) via the UNO, asking her to take legal action against GCM immediately.

On 26 August 2006 three teenage boys were shot dead, and more than two hundred injured by paramilitary forces in a peaceful demonstration of 80,000 people against the mine. (5) Annual ‘Phulbari Day’ rallies have been held every year in the community and across Bangladesh, commemorating the deaths and protesting the company’s continued plans.4 Recently, GCM’s CEO Gary Lye has filed multiple cases against 26 community organisers in Phulbari and Dinajpur claiming he has felt ‘harassed’ when he visited the area in an attempt to continue coal mining plans in 2014. Lye demands $2.6million as his compensation from the community representatives who have stopped GCM Resources.

Case studies and photos from protests in Bangladesh are available.