Press Release: “Profit is not worth life” – Five years on from Samarco Dam disaster 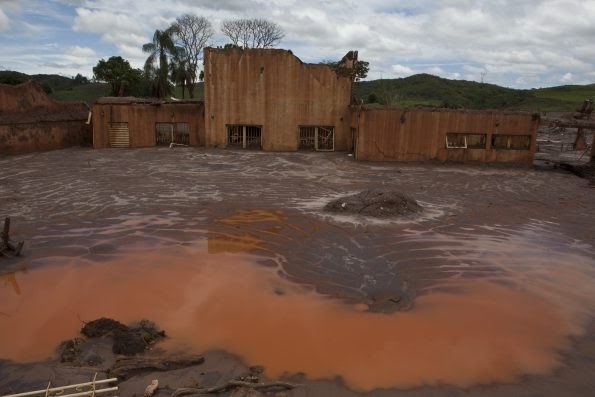 The village of Bento Rodrigues, destroyed after the dam collapse.

When the Fundão tailings dam at the Samarco mine collapsed at around 15:30 on 5 November 2015, millions of cubic meters of mine waste spilled out. The ensuing toxic mudflow killed 20 people. The villages of Bento Rodrigues, Paracatu de Baixo and Gesteira were destroyed. Over 600km of the river basin was polluted. This was just the beginning of the suffering for those who had made their homes and livelihoods in the Rio Doce basin. In the five years since, they have had to live with polluted water, lack of access to their land, and broken promises from the mining giants behind the catastrophe.

The Samarco mine and its tailings dams were owned by Vale, a privatized Brazilian company, and BHP, an Anglo-Australian mining giant listed on the London Stock Exchange. While the company did face sanctions (1), neither Vale or BHP have yet been held properly responsible for the dam collapse, nor its immeasurably destructive after effects. This, despite evidence that the company knew such a disaster was possible (2). BHP currently faces the possibility of the largest lawsuit in UK history over the issue (3), but while communities wait for this to move forward, rights violations continue to mount. Not one of the promised 355 new dwellings promised by the mining companies has been completed, and a recent refusal to renew the services of the Independent Technical Advisory (ATI) group (which facilitated participation of affected communities) signals further setbacks in the process of achieving meaningful reparations.

London Mining Network (LMN) posed several questions to BHP during its recent shareholder engagement & AGM sessions. While some were addressed with glowing figures on how much BHP are doing (4), a greater number of questions were ignored (5). BHP’s annual report offers nothing of substance on the issue of Samarco, mentioning only vague statements about ‘getting back to normal’(6).

“Local communities continue to await justice for the environmental and social destruction that has been inflicted on their lives by BHP Billiton and Vale.  Five years on, despite repeated assurances from the company, it seems clear these communities are still not able to return to their homes or resume their normal lives.”

Brazillian civil society group MAB (Movement of People Affected by Dams)(7) has been working with the affected communities for the past five years and, during the pandemic, has been distributing emergency food packages to those who lost their homes and livelihoods. Since 5 October this year, MAB has been carrying out a series of solidarity actions under the moto “Vale with injustice in its hands, 5 years without reparation in the Doce River basin”. They are calling for international attention on the situation in the Rio Doce basin and for supporters to send photo and video messages of support.

In their statement, MAB said:

“November 5, 2020 marks 5 years since the rupture of the iron ore tailings dam in Mariana/MG which destroyed the entire Doce River basin, reaching the coast in the state of Espírito Santo, which is one of the greatest socio-environmental crimes of the history of Brazil. Even after so many years, the company Samarco, a joint venture between Vale and BHP Billiton, was not duly held responsible by the Brazilian State. I fact, the states and federal governments, together with the judiciary, have been complicit in all the human rights violations that occurred on that sad November 5th, which are getting deeper and more complex every day.”

For information on MAB and the situation in Brazil, contact: