BHP and Rio Tinto have a long history of extracting minerals then pulling out, leaving devastation in their wake. Climate justice organisation London Mining Network reveals the extent of this in a new report. 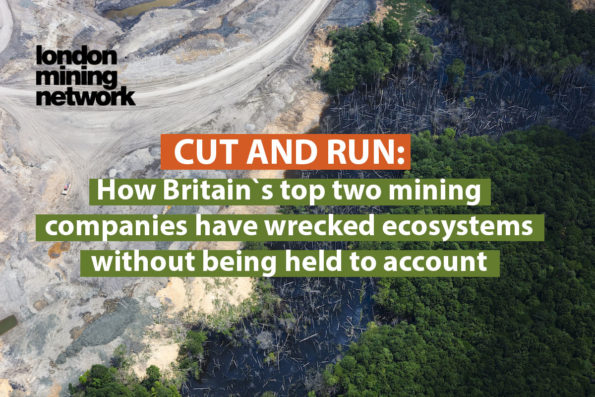 London Mining Network has published a new report entitled ‘Cut and run: How Britain’s top two mining companies have wrecked ecosystems without being held to account’. The report includes examples from Southeast Asia of where the British-Australian multinationals BHP and Rio Tinto have left legacies of conflict and environmental destruction, long after they’ve fled the scene.

Recent examples of mining messes include Brumadinho, the tailings (mining waste) dam owned by Brazilian mining company Vale, which collapsed in January 2019 in Minas Gerais, Brazil. Vale executives, along with its German advisors TUV Sud, were recently charged with the homicide of 272 people; 14 people are still missing. Vale, along with BHP, jointly own the Samarco iron ore mine and tailings dam which also collapsed in 2015, causing Brazil’s worst environmental disaster in history and the deaths of 20 people. The trauma due to loss of life, displacement and job loss and the environmental repercussions of contamination of river systems in both catastrophes will be felt for decades to come. The entire mining industry needs to be held to account for such mining messes, and laws made which demand the cleaning up of messes made by mining companies before they pull out of projects.

Despite the best efforts of the industry, particularly BHP, to greenwash the extraction of fossil fuels and metals, the practice of ‘cutting and running’ when companies close mining operations tells us another story. The harm that extraction causes people and the planet doesn’t end once the companies disappear.

On 10th February, BHP became the world’s top copper producer, but this isn’t good news for the communities affected by their copper mines, and the other metals and minerals it extracts. In 2002, the company walked away from the Ok Tedi copper-gold mine it had controlled since 1982 in Papua New Guinea. For years it had dumped waste straight into the local river system. Eventually the company concluded that it should no longer do that and should not have operated the mine after all. But 18 years later the contamination and mess remains.

For shareholders in Rio Tinto and BHP, the deadly legacies of these mines make for risky investments, as the report illustrates.

Co-author of the report, Hal Rhoades, from The Gaia Foundation, said:

“This report shows how British multinationals have profited from destroying ecosystems and people’s livelihoods on vast scales in the Global South, while leaving their mess behind for communities to deal with. These are the same companies who are now trying to convince us that they hold the answers to the climate emergency. We cannot continue to pay lip service to tackling climate change while allowing the world’s largest corporations to devastate ecosystems that help regulate the climate and the communities that care for them. Holding these companies accountable and calling out their greenwashing is a crucial part of climate justice.”

For press enquiries and photographs: