On 22 October, four frontline defenders in the UK for Unmasking BHP week met with BHP investors in Westminster, London. This was minutes walk away from where BHP held its annual general meeting (AGM) on 17 October.

In a first for LMN and Local Authority Pension Fund Forum (LAPFF), who we coordinated the meeting with, institutional investors representing asset managers, trade unions and local authority pension funds, heard from the visitors representing communities in Brazil, Colombia and Chile.

This meeting was a result of feedback from our visitors last year who said that they wanted a chance to engage with investors, perhaps as part of an alternative AGM, without the agenda being set by the BHP executive board. 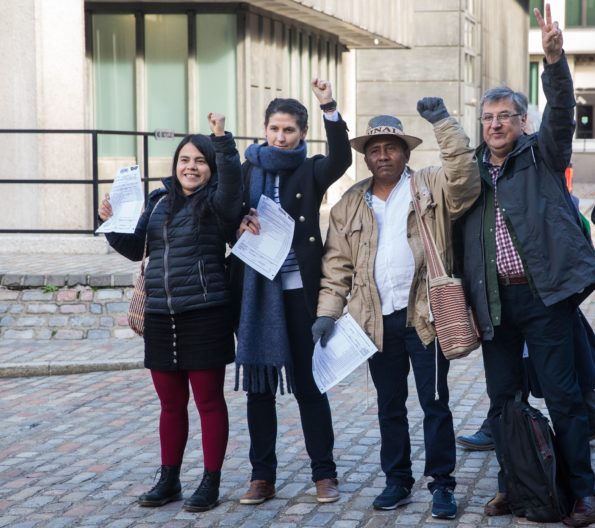 Outside BHP’s AGM. Frontline defenders from Chile, Brazil and Colombia

For LAPFF, the goal of engaging with community members affected by investee company operations was to “understand better BHP’s environmental and social impacts, both on people and on assets, in order to improve outcomes for community members and investors”.

At the two-hour meeting, the four defenders expressed continued frustration with the slow pace of reparations by BHP in the wake of the Samarco tailings (mine waste) dam collapse, the environmental and social impacts from Cerrejon mine, and the company’s greenwashing tactics. They called on investors to challenge BHP on its alarming comment at its AGM that more mining, rather than less, was necessary to avert the climate crisis.

The day before this meeting, and four days after the AGM – the company announced the signing of four renewable energy contracts which will replace coal-fired power at two of its copper mines in Chile, in an apparent cynical attempt to create a good news story so soon after the frontline defenders denounced its co-opting of the climate crisis narrative.

Speaking to the investors, Lucio Cuenca, from Latin American Observatory of Environmental Conflicts (OLCA), talked about the massive amount of fresh water that BHP is using at its copper mines in Chile, while, because of drought, 50 percent of the water available for the Chilean population is desalinated water. Lucio pointed out that, while BHP claimed to be reducing its carbon emissions, the Guardian revealed on 9 October that BHP is one of 20 companies in the world responsible for a third of all carbon emissions.

Indigeneous Wayuu community leader Alvaro Ipuana from Nuevo Espinal, one of many communities forcibly displaced by the giant open-pit Cerrejón coal mine, spoke powerfully about the re-traumatisation of his community after being displaced because of the expansion of the mine into La Guajira’s vital water source, the Bruno river.

Catalina Galvis, from CENSAT (Friends of the Earth Colombia), explained the need to hold BHP account for its 33 percent stake in Cerrejon mine. At its AGM, the company refused to admit responsibility for human rights violations and environmental destruction at Cerrejon – because of its ‘minority shares’ in the company. Catalina pointed out to investors that the three British companies which own the mine (Anglo American and Glencore being the other two), each own 33 percent of the mine, making 100 percent in total – total responsibility.

Tchenna Maso, from grassroots movement MAB (Movement for People Affected by Dams) in Brazil, explained to shareholders that not one house has yet been built after the Samarco tailings dam collapse in November 2015.

Investors then asked questions to the speakers about BHP’s copper mining (at the AGM, the board stated its intention to increase its copper extraction to between five and 20 times the current amount), working conditions, and how to hold the company to account on its claim that it holds a ‘social license’. After the meeting, many shareholders spoke with the four defenders and asked what they could do.

LAPFF hopes that this meeting will be the first of more events connecting community members with investors to “foster better human rights protections as a means of creating more sustainable shareholder returns”.

Investor comments included concern about the huge disrepency between what the company says in its glossy brochures and website in terms of community engagement and its statistics about its climate credentials and water use, and what is actually happening on the ground for affected communities.

While BHP tries to convince its shareholders that their investments are ethically sound, events like this mean that frontline defenders are able to speak truth to power – that communities are not being consulted, that mining causes devastating harm to people and the environment, and that any reduction in fossil fuel mining is not license to mine for metals instead.

Our full report of the BHP AGM will be online shortly